Share All sharing options for: # 18 Raised To The Rafters! 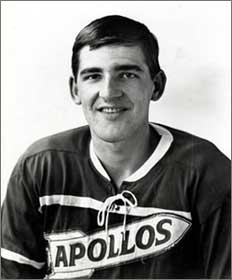 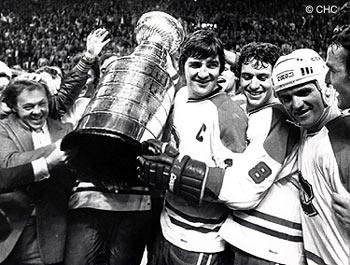 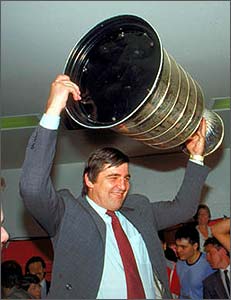 Serge Savard was known as 'The Senator' for as long as most fans can remember. Inspiring what famed broadcaster Danny Gallivan loved to call the 'Savardian Spinarama,' he was an integral part of one of the greatest eras in Montreal Canadiens' history. He was an integral cog, part of a dynamic defensive troika that included Larry Robinson and Guy Lapointe, that helped lead Montreal to eight championships in twelve years. Tonight, the Canadiens will raise his jersey #18 to the rafters.

Savard was as dependable as a defenseman gets. Flashy at times for his era, he was a player coach Scotty Bbowman could throw on the ice in every crucial situation.

Serge Savard's blood pumped red, white, and blue, the colors of his beloved team in his youth.

Born on January 22, 1946 in the village of Landrienne, Quebec, Savard followed the results of the Canadiens from childhood, and when the eleven-year-old, already standing close to six feet tall, moved to Montreal his passion grew even stronger. By fifteen, Serge had been placed on the Habs reserve list. He progressed quickly through the minors, joining the Montreal Junior Canadiens in 1963-64 where he was made captain.

He graduated to the big club in 1967-68 and the Canadiens won the Stanley Cup for the 3rd time in three seasons.

In his second NHL season, Savard was becoming the dominant team player we reflect back upon today. For a second straight season, Montreal not only finished first in the East, but proceeded to capture the Stanley Cup. Savard was outstanding, blocking shots, clearing the zone and collecting ten points in fourteen games. His four goals was one shy of an NHL record for playoff goals by a defenseman in one season and helped earn Serge the Conn Smythe Trophy as the most valuable playoff performer as his Canadiens swept the St. Louis Blues in four games.

But injuries hampered Savard's continued progress. In a March 1970 game against the Rangers, Serge crashed into a goal post and broke his leg in five places.

"There was a time when I was afraid I wouldn't play again. My leg was broken in three big places besides the chips and I got scared after the doctor took off the cast for the first time. The break was moving inside," Serge recalls.

To complicate matters, Savard returned to the Canadiens only to break the same leg again in February 1971. Caught by a Bob Baun hipcheck in a game against Toronto, the break put Serge out of action for close to a year. But the break did more than put Savard out of action; it changed his style of play.

"When I was younger, I was more of a rusher but after the two bad leg injuries, I didn't have the same speed so I became more of a defensive defenseman," states Serge.
Although never afraid to carry the puck, Savard was found to be invaluable in his own end.

"Not many guys are hurt stopping shots," Serge explains, describing his skill as a shot blocker. "You could get killed if you get hit in the temple but the average is good. I turn sideways from twenty to twenty-five feet away and let the goalie take it. He can see it better. To me, there's no danger if you time it right. You have to be almost on top of the shooter before falling."

Despite missing substantial portions of two seasons, Serge Savard was chosen to be a member of Team Canada in the 1972 Summit Series against the Soviets.

Serge Savard played fourteen seasons as a Montreal Canadien, and was part of eight Stanley Cup championships during that time, including four consecutive between 1976 and 1979. Serge was Montreal's captain from 1979 to 1981.

On August 12, 1981, Savard decided that he had had enough. The team had been struggling and Savard, who had proven to be a savvy businessman through his years with Montreal, decided to pursue those interests outside of hockey. After turning professional with Montreal in his early 20s, Savard had begun purchasing apartment buildings at low cost and refurbishing them. His business acumen was enough to make Serge stand out in a sport where but a handful of players oversee their own affairs. While his teammates were playing cards or reading sports magazines, Serge was reading The Wall Street Journal.

That afternoon, Savard stated, "This is the most difficult decision of my life. As a player, you know this day is coming but you never want to believe it."

Toe Blake, the former coach of the Canadiens, added, "It's been said that anyone can be replaced, but that's not the case here."

Savard's old roommate, John Ferguson, plucked the star defenseman in the waiver draft that summer and attempted to convince Serge that he should reconsider his retirement and become a Jet in Winnipeg. Ferguson and Savard were partners in several thoroughbred racehorses, and the sales pitch was solid. "

I didn't really want to come back," Savard explains. "I was receiving calls from John. I saw that the Jets weren't the same as the year before or else I wouldn't have come back, but the club had Dale Hawerchuk, a rookie phenom, and was going for first place. I hadn't enjoyed the game the previous few years. Things were on a sour note with the Canadiens. There were a lot of young defensemen waiting in line. I made the right decision. I felt wanted by Winnipeg and the atmosphere was very different."

Savard spent two seasons with the Jets, guiding the team to the division semifinals both seasons.

Then, with much fanfare, the Montreal Canadiens hired Savard as Managing Director on April 28, 1983.

"It was a fantastic feeling to be back with the Montreal organization where I had so many friends and memories," remembers Savard.

Montreal sent a third-round draft choice and $50,000 to Winnipeg to get Savard released from the final year of his contract with the Jets. He retired as a player having played 1,040 regular season games in which he accumulated 106 goals and 333 assists for 439 points. Savard added 19 goals and 49 assists for 68 points In 130 playoff contests.

Besides the Conn Smythe Trophy in 1969, Serge won the Masterton Trophy for perseverance and dedication in 1979. That same year, he was selected for the NHL's Second All-Star Team. But individual awards eluded the wily veteran, even though his considerable presence contributed greatly to the eight Stanley Cup championships won during his prestigious career.

"I never pay attention to individual awards and I think that sometimes, too many people place too much value on them" , savard has said.

As the Canadiens GM, Savard was easily as clever as he had been both on the ice and in his personal business career, which had amassed him a considerable personal fortune. In 1986 and 1993, the Canadiens won the Stanley Cup, while the team went to the finals in 1989.

Five games into the 1995-96 season, the club replaced Jacques Demers as coach with Mario Tremblay and fired Serge Savard, replacing him with Rejean Houle.

Hurt, Savard commented, "My personal feeling was that it was unfair because I was convinced I could find a way to turn things around. I'd done it before, but I understand that the team wanted to make a change."

Savard turned his attention away from hockey and continued developing his business ventures. He built a new career as a real estate developer, hotel owner and investor, and garnered considerable power in both the business and political arenas.

"I guess I'm like everybody else," Savard admits. "You've got to have something in life that you're proud of. You have to achieve something."

Serge Savard has achieved a considerable amount and has considerable reason to justify his pride. His hockey legacy includes ten Stanley Cup rings (two in management and eight as a player) and representing Canada in the 1972 Summit Series and the 1976 Canada Cup. The piece de resistance for Serge Savard came with his 1986 Induction into the Hockey Hall of Fame.