Share All sharing options for: Way To Go Mats! 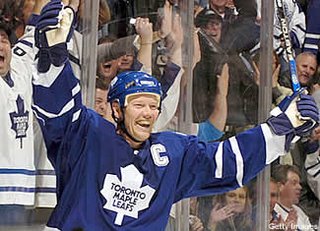 Now, I'm no Leafs fan - no one will ever accuse me of that! I would be totally off base, however, if I did not aknowledge the achievement of Mats Sundin this evening.

I'll say he did it Jean Beliveau style!

Back in 1970, Beliveau was in his final season as a Montreal Canadien when he notched a hat trick in victory along the way to getting his 500th career goal.

Beliveau was a leader and captain of a Canadian team, as is Sundin, in perhaps a quieter manner (I'm being nice!) .

On Febuary 11th, 1970, Beliveau slipped three pucks by Minnesoata North Stars goaltender Gilles Gilbert to become only the 4th NHLer to achieve the 500 goal plateau. Before him were the legendary Maurice "Rocket" Richard, Gordie "Mr. Hockey" Howe, and Bobby "The Golden Jet" Hull - elite company like no other.

I remember the night like it was yesterday, as it was one of my earliest hockey memories. My father's favorite player had been Beliveau, who I'd had the pleasure to watch for only a few years. I was all of 8 years of age he when he scored that goal.

My father, and Beliveau were both born on August 31, 1931. I met "Le Gros Bill" once, at an autograph signing in town. The words "class" and gentleman don't even begin to describe the man. It was a pleasant and unforgettable encounter. I wish Dad could have been there.

If Mats Sundin were to become one tenth of what Belveau means, to Leafs fans, it would be awesome.

The often maligned Leafs captain has never enjoyed a supporting cast the likes of the 50's and 60's Canadiens Beliveau had to enhance his reputation. Nonetheless Sundin has been a leader for the Leafs for a decade and often deserves a better fate.

Many has critcized him through the years. I have often questioned his desire, despite his surrounding team, in his quest to be the best he can be. I have maintained that he has Jagr like talent, minus the desire. As the Leafs were floundering late last season, and as they are challenged quite heavily to make the post season this year, I am now seeing the Sundin I always believed was there.

Some may question how I can lump someone who I claim has underacheived, with a 10 time Stanley Cup champion.

It has all to do with the manner in which he leads. Despite not getting his mits on hockey's Holy Grail, Sundin has been to battle for the Leafs, year in year out. While new Leafs coach Paul Maurice has stated that Sundin is not as quiet a leader as most assume, the swedish centerman has always been there for the Leafs cause.

Quite honestly, Sundin and Beliveau may wll be cut from a similar mold. It's called talking on the ice. Saying an abundance, in a simple word!

Should Toronto resign him? I think it would be a scar on the organization if they didn't. His play this season tells me he has lots left in the tank. He should retire a Leaf and be spared the treatment given another great Leaf, Doug Gilmour.

If some can't quite picture the Buds minus Tie Domi, imagine life without Mats. Who leads then?