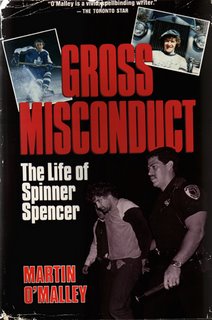 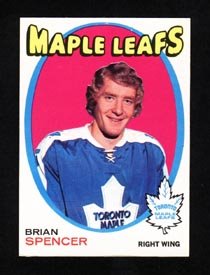 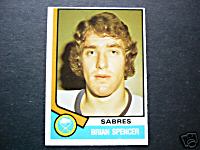 The life of Brian "Spinner" Spencer has been termed turbulent, fast and tragic. The movie "Gross Misconduct", released in 1993, detailed a classic downward spiral of an average NHLer, who bounced back and forth from the minors to the pros. It documents his troubled upbringing, his rise to the NHL, his bouts with incredile circumstances, and finally, his desperation to make sense of his life after hockey.

If you have never seen it, I highly recommend digging it up. It is essential for any hockey fan to see. I'd go so far as to call it "life altering" in it's perspective. It is the flipside of "Slapshot" - a composite of every dream come true, harshly balaced by the worst of life's grimmer realities.

After viewing it myself years ago, I must say that I never looked at an NHL career the same way again. From a Canadian boy's standpoint, the story of "Gross Misconduct" is simply chilling and stark.

Growing up poor in the British Colombia backwoods, Spencer dreamed as every Canadian boy dreams, of beating life's doldrums by making it to the big leagues. Oddly enough, the first NHL game Spencer witnessed, was his own debut in 1970 with Toronto. His energetic gung-ho style was appreciated by his junior teams and coaches. The "Spinner" nickname, was derived from a spinning top. If ever you'd seen him play, Spencer simply pinballed from board to board bouncing off anyone in an opposing uniform. He was a treat to watch.

Brian received an invitation to the Maple Leafs training camp in 1969 but didn't make the final cut. He did impress enough to be assigned to the farm team in Tulsa where he played most of the season. He got his first recall to the Maple Leafs on December 9, 1969 but didn't play. He had to wait until March 14, 1970 before he making his debut.The following season season Brian was a regular in Toronto for most part of the season.

Unfortunately, tragedy struck Brian, that would haunt him for the rest of his career and his life.

Brian told his parents that he would be a second period guest during Hockey Night In Canada's telecast of the Leafs game against Chicago on December 12, 1970. Brian's parents were extremely proud to have a son in the NHL, especially his father Roy, who had recently purchased his first black and white television for the occasion.

When Brian's father discovered that the CBC affiliate near the family's Fort St.James home was carrying the Canucks - Golden Seals game instead of the national telecasts, he became enraged. He furiously drove two hours to Prince George Television station CKPG and held employees hostage with his pistol and forced them to cut the transmission power. Soon after, the RCMP arrived and a shootout followed. Roy Spencer was shot and killed at the age of 57.

The death of his father in this manner scarred Brian. It marked his off ice disposition and composure as well as hindering his relationships with friends as well as marriage. It was his father's dream to have his son playing hockey in the NHL. After Roy's death, much of Brian's motivation and spirit were sapped as his energetic free will spilled over into uncontrollable anger and unfullfillable needs.

Brian split the next season between Toronto and Tulsa and was left unprotected in the 1972 expansion draft. Picked by NY Islanders, where he spent the next 18 months, he began to toil as a fringe player, used mainly for his aggressive tactics moreso than his hockey skill. He was traded to Buffalo in 1974 where he peaked offensively for 41 points, including 12 goals. He became a fan favorite in the Sabres uniform and seemed to prosper while enjoying his own renaissance of sorts. His hustle and ability to deliver a crunching hit were rounding him out into a complete player.

After three years on the Island, Brian was traded to Pittsburgh where his offensive production dropped off and he became specialized as a checking forward. His NHL career trickled awat from his as he appeared in only 7 games with the Penguins in the 1977-78 season before hanging on in the AHL with Binghamton, Springfield and Hershey. He retired after the 1979-80 season.

The story about Spinner Spencer should have ended there, but unfortunately his life after hockey became a mess
Upon annoucing to his wife that he was hanging it up, she immediately left him to dry. As the movie details, she was excruciatingly forthright in letting Spencer know the reasons for the split - goodbye to the money and glamour of being married to a big leaguer.

Looking to piece his life back together, Brian moved to West Palm Beach, Florida right after he retired. He fell in with the wrong kind crowd in Florida, involving with drugs and crime to make ends meets and numb his troubles. He moved in with a prostitute who worked for an escort service. Brian was never happy with this and after a falling out she accused Brian of committing a 1982 murder against a Palm Beach Gardens restaurateur, in a drug deal gone bad.

Brian was arrested for a first degree murder in January 1987 but was acquitted after a 10-month trial. The experience left Spencer reeling in self doubt and pity. He stooped low in attempts for street survival with little to no income. As everyone knew him as a former NHL player, he picked up quick cash by forging Bobby Orr's signature onto hockey memorabilia.

In June of 1988, Brian and his friend Gregory Scott Cook cruised around Riviera Beach in search of cocaine. After the purchase they stopped their car a couple of blocks later to consume the drug when a stranger approached the vehicle`s side window in a holdup attempt. Brian surrendered the last three dollars he had when the assailant fired a bullet into the 38 year old fomer NHLer`s heart.Cook, who had escaped uninjured, rushed Brian to paramedics. They sped Spencer to St. Mary's hospital in West Palm Beach where he was pronounced dead on arrival.

Spinner's hectic life came to an abrupt end just as many believed he was turning his life around. The curly haired Spencer was survived by his twin brother Byron, mother Irene, his two ex-wives, Linda and Janet plus his five children, Andrea, Nicole, Kristin, Jason and Jarret.Hockey fans will always remember that curly hair and wide smile on his face when he hustled down the ice to nail somebody to the boards.

Be sure to hit the links I`ve referenced for a more detailed look at his life and times. It`s worth more than a glance.

Both the movie and book on Spencer`s life are best found for purchase online at bargain prices. Do yourself a favor and pick it up. You can thank me later!