Hawks Nip Habs 2-1 (Or I Stand Accused of Being Deceived!)

Share All sharing options for: Hawks Nip Habs 2-1 (Or I Stand Accused of Being Deceived!) 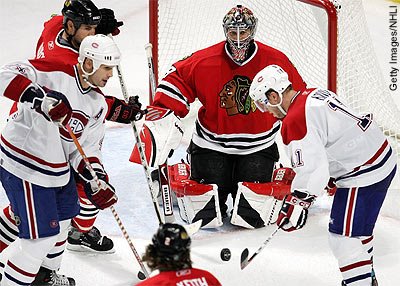 The Canadiens finally succumbed to regulation time tonight, falling 2-1 to Chicago. The Black Hawks, primed by the additions of Martin Havlat and Bryan Smolinski, and a return to form by Nikolai Khabibulin, are off the one of their better starts in recent memory.

In all honesty, other than those three names, the Hawks didn't impress me much in this game. Neither did the Habs for that matter. It was obvious that they didn't have all that much in the tank, in this second of back to back games. Still, they outshot, outhit, and outchanced the Hawks. Trouble is, they forgot to outscore them.

Khabibulin robbed Higgins, again the Habs best player on the night, from a couple of sure goals. At the other end, David Aebischer was rather ordinary in letting both goals find his five hole with ease. Hopefully, this Swiss cheesing won't continue. He was particularly weak on the Smolinski goal, having already dropped to his knees when the shot skittered between his pads.

Mike Komisarek made a great play late in the game, showing lots of speed and agility in catching a Hawks forward who had slipped in behind him on a break. Just as the shot was to be taken, Komisarek smoothly lifted the stick and the puck slid to Aebischer. He is one of the more improved Habs this season and so far has begun to justify his high draft selection.

The habs continued to do well on the penalty kill, shutting down all 7 Chicago chances.

Not much more to say on the game itself other than that.

My rant for today is on that old nemesis, the back to back scheduling of games.

My question is simply this. If the NHL seriously wants to improve the quality of each contest, why don't they do away with games on consecutive nights. Hockey is such a physical game, that teams playing the second of two are always challenged for energy. I won't use this as an excuse for the Habs loss tonight - I did mention I felt they outplayed the Hawks! It is the reason behind dozens of snorefests still hampering the quality of games involving all 30 teams, hindering especially those on the coast. Montreal shifted time zones slightly for this game - not that much of a big deal. Imagine the West coast teams, already playing out of their usual zones and having to play back to back. Though one may argue that it evens itself out over a seasons course, that is hardly the point. The price of a ticket is still the same for the fan paying it, why should they suffer an inferior product. And that is exactly what game 2 usually turns out to be.

Now it is time to take myself to task somewhat. The subject - the Habs (and Leafs) great starts.

So far this season, much has been written about Montreal and Toronto's sprint from the gate. I stand accused to a point of hopping onto the excitement bandwagon some in heralding a slight Habs resurgeance. Their record after 6 games is 3-1-2, good for 8 points. They pointed in the first five games due to the extra shootout point gained by a pair of losses. Taken in context, they are merely 3-3. As for Toronto, by the same methods after tonight's loss to the Avalanche, are also at 8 points after 7 games. Their record is 3-2-2 or in pre lockout speak, 3-4, a game under .500, if you will. In this light, I must ask, what are we so excited about again?

In the crooked mirror that is today's NHL standings, are we perhaps fooling ourselves as to our teams prowess. Deceived may be a better term!

The awarding of that dubious point may be the illusion behind the so called parity. It has many hockey folk debating the merits of a 3 point system. The placing of the overtime and shootout losses in its separate column create the mindfuck that your team finishes the season 12 games above .500 and still misses the playoffs. Go figure!