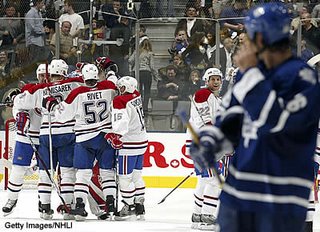 I hate the shootout! My feeling on it, is kinda like this - if a dog were licking your balls, and you had your eyes closed, you might enjoy it. In short, the cheap thrill is still wrong!

I will always much prefer it if they would eliminate games on back to back nights, book team flights out of town in the A.M., and let them play until it's won fair and square - simple as that!

I don't find the Habs played the better of two games tonight, although they may have made less mistakes. Aebischer in goal was solid and Raycroft at the other end wasn't too bad either. I was again impressed by Kyle Wellwood on the Leafs side. If only the leafs had more prospects of this calibre, the future would look brighter.

My beef with the Leafs will always be that their goals are so short term. Spend all they can, get in the playoffs, make it look like there's a plan. The sad thing is, it works in the sense of fooling Leaf fans into thinking something positive is at the end. The message is never about rebuilding, stockpiling draft picks, creating competition on the team, or grooming players.

I was disgusted to see Justin Pogge in some faggot ass clothing ads last week. Hey, you wanna be a male model, fine, by all means. But you're a hockey player, concentrate on the job at hand first. Check out Jose Theodore and see where off ice distractions will get you.

Nobody in the Maple Leafs organization has the wherewithall to advise the youngster of what is expected of him as far as goals and behavior. The sound of Pogge bragging about easy money and all he was going to spend it on would worry a competant GM. Thank goodness the Leafs don't have one!

About the games, it is still so early on that cementing long term opinions on anything seems fruitless. Teams looking good one night, look confused the next. Players have multi-point nights and then have quiet disappearances. Maybe that's the nature of back to back games and a crowded schedule, who knows?

Tonight, Micheal Ryder had the good sense to shoot, rather than deke in the shootout. Hell, if Chris Higgins can rifle one by Raycroft, why not. Kovalev rang another off the crossbar on a quick as lightening backhander. The goalposts were good to the Habs as well.

Lastly, my biggest irritant when the Habs meet the Leafs, are the sight of Darcy Tucker and Chad Kilger. Not because I hate them, I just hate them in that jersey.

Tucker was originally a Habs draft pick steal, taken 151st overall in 1993, by good GM Serge Savard. Sideshow Bob, was following in the worthy bootprints of superpest Claude Lemieux, a player Montreal never quite replaced. He went on to win his second and third Memorial Cups with Kamloops before getting the AHL rookie award with the Fredricton Baby Habs. Making the big club the following year, he had a decent rookie season and looked to be on his way to a good career. In 97-98, the Habs got all attitude on him, as he some pine and never stopped bitching about it. Hey when a player wants to play that badly, it's a good thing isn't it. The Canadiens tried to keep the boy down by giving him Kibbles and Bits icetime, and after the kid unsurprisingly gets all of one goal in 39 games, Habs GM at the time, Rejean Houle lengthened his string of consecutive trade catastrophies by shipping Tucker, another decent prospect and 1st round pick David Wilkie, and the second non-coming of Stephane Richer to T Bay for all of Patrick Poulin, Mick Vukota, and Igor Uglyanov. Ask me again, why am I pissed still?

As for Kilger, I found him a very valuable and versatile Hab in the three years spent in Montreal. When he was first aquired from Edmonton his play made him into a media darling. He had lots going for him. He had a decent shot, killed penalties, went to the net intelligently, hit like meanass bastard, and spoke french to boot - which made him a handy billingual interview, win or lose. At the time, the Habs were setting an NHL record for man games lost to injury (over 500 that year - cue Hodge comment!), and Kilger worked his way to the top line and primo ice time very quickly. He set career highs for himself in a half season. In the following years, his ice time dwindled as players returned from injuries and he succumbed to a few himself. In his final Hab year, he was waivered twice when the Leafs snapped him up wisely. I been griiting my teeth ever since.

Chad is a Cornwall boy, and the first local kid to suit up for the blue, blanc, rouge since Newsy Lalonde. He was a polite and well liked kid about town as he starred for the Cornwall Colts before going off to Kingston, where he had a great year. He was drafted into the NHL, 3rd overall by Anaheim, only to become an NHL journeyman. I always thought the kid had all the tools, and is a long time coming late bloomer. Everybody's interest in his career peaked when he landed in Habland, and he's just as popular around town as a Leaf. He does all kinds of charity work in the summer, including bringing some big names to town for his annual golf tournament.

His father, whom I cannot stand, is also of some reknown in these parts. Bob Kilger was a half assed NHL referee in his younger days until problems with his eyesight cut his career short. Rather than become a scout for the Leafs (No, I'm not joking!) he took on the task of coaching the Cornwall Royals in 1981. The Royals were so loaded in the day (Hawerchuk, Gilmour, Marc Crawford) that Kilger rightly proved any idiot could lead them all the way to a second straight national championship. His bench time was short and a decade later he emerged all polished and high as a local politician. He spent close to a decade as our local federal MPP and was in fact Speaker of the House of Commons his last six years. Bystander Bob, as I call him was finally and thankfully ousted two elections ago prior to the big Liberal purge of last year. Kilger was a Liberal. I have voted Liberal all my life - except for when Mr. Bystander ran - I'd vote PC.

Bob Kilger is currently running for Mayor of Cornwall. The big election issue this time around, is where we will be placing our planned 4 pad arena. Yikes!