Share All sharing options for: Habs 5 Flames 4 - What A Game! 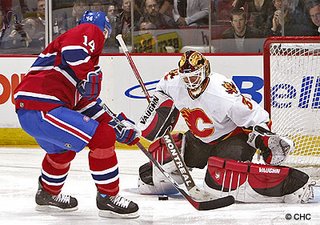 Tonight's Habs - Flames tilt had all the makings of an intense, high tempo playoff game.

Before I took off to catch the Cooper show, I got to watch most of the first period, leaving in a haste with no time to set the VCR. I just finished watching it on "Express", which is RDS's (French TSN) 60 minute wrap on the game, making the fast paced action even faster.

The game was wildly contested from start to finish. Unfortunately I missed the Regehr hit on Downey both times I watched it. I just caught it on highlights now, and it doesn't look as blatant as it had been described. Downey did have his head down when Regehr caught him square. If anything made it look worse than it was, it was the speed at which the Flames defenseman came at him, and Downey doing the dazed and confused tango on rubber legs afterwards. At worst, the officials could have assessed a charging call - but I'd be picking at straws to suggest anything more.

That hit, and Radek Bonk's shorthanded goal minutes before, set the tone for battle.

The officials handed out a total of 50 minutes of sin bin sittings and special teams ruled the game. The Habs were 3 for 7, while the Flames, hurting of late on the PP, went 2 for 8.

It has to be said that for all the calls made, as many were missed. They could have shopped them out like parking tickets and played 60 minutes 3 on 3.

Sheldon Souray and Radek Bonk each notched a pair to lead the Canadiens to the win. Both players, who have been much maligned in the past, are off to better starts this year. Bonk seems absolutely transformed under Carbonneau's coaching and pairs extremely well with Mike Johnson. Johnson is no Jan Bulis, he never takes a second off, and has clicked communicatively with Bonk from the get-go.

Both Souray's point blasts found the back of the net thanks to Chris Higgins giving Kipprusof an outstanding view of his ass. I noticed that Higgins doesn't seem to park himself there on a constant basis, he just scoots there with great speed whenever the puck heads to the point. Smartly, his move is hard to defend done this way, as it brings along the D and adds to the screen. I'll go out on an early limb and boldly predict Higgins is in the All-Star game this year. He's a treat in all facets of the game.

Despite the high score, neither Huet or Kiprusoff played that badly. The game winner by Kovalev practically ripped out Kipper's armpit as he got a piece of it. The Souray goals were never seen, the second bouncing off the Flames goalie before ricocheting back behind him.

The Flames line of Lombardi (2 goals), Kobasew, and Tanguay was the Flames best. They will gel it seems and only get better. The Flames record is terribly deceiving. They are a scrappy and talented bunch of workers who never quit. Flames fans shouldn't be all that worried about what looks like a so-so record at this point.

The Habs did a mildly decent job neutralizing the Iginla line. Iggy had some chances, especially when Huet stoned him on a clear cut break. He drew the best of the Habs coverage tonight, and the criticism directed his way is unfair, as far as I witnessed this evening.

This was the first game that I can say I was happy with the Habs overall effort. They'd better have left something in the tank for the high flying (can you believe the use of this adjective on this team?) Blackhawks.