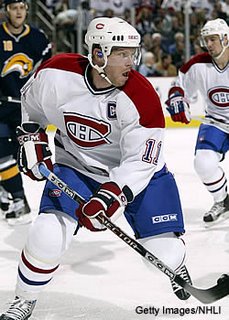 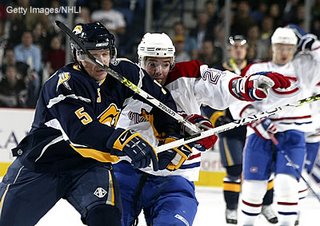 I'd call tonight's 5-4 SO loss entertaining and enraging all at once.

While I have long admired the Sabres tenecity, I've hated them for having the nasty habit of uprooting whst looks like a sure Habs win with devious third period comebacks. This one was almost a carbon copy of a late season game from last year, when the Habs needed a point to qualify for the playoffs near the final weekend, and the Sabres came from behind by three to zap them. This contest had it's fair share of strange moments and great plays nonetheless. Regardless, any game this early in the season is no reason to panic, get excited, slit your wrists or buy season tickets.

Opening night home games have the usual pre-game ceremonies that drag on and stutter the home team slowly out of gate and this one was no exception. With Buffalo already having one game under their belt, they didn't exactly come out pumped.

Unfortunately, and I hate like mad to bring it up, the officiating was it's usual NHL brutal. When you could make a hightlight reel of questionable calls, it's never a good sign. Yeah, I miss the days when the refs just let the teams play the game. Nowadays, a refs arm goes up and no one in the building has much of a clue as to what is being called half of the time. By the middle of the third period, the fans in Buffalo were ready to lynch some zebra's they were so frustrated. Add in that the Buffalo powerplay is somewhere near 0 for 14, and it makes for rising temperatures at HSBC.

What had the home crowd boiling was three calls against the Sabres in a 74 second span, with the first call (goalie interference on Novotny) and the third (hooking on Drury) being marginal calls at best. Novotny had cut to the net from a sharp angle after beating Souray to the outside, and skated through the crease and bumped Huet naer the head as he tried to sneak one past. Drury never seemed to touch Samsonov, who tumbled over himself like he had caught a rut near the boards. Koivu's second of the game on the ensuing 5 on 3 made it 4-2 Habs.

Earlier in the game, the Canadiens were called for too many men, while not even in the process of a line change. Coincidently, Buffalo had the puck and appeared to throw a player over the boards right before the call was made. The most enfuriating moment of the game occurred with about 6 minutesd to play when the ref blew a play dead in the Buffalo zone. It appeared a call was being made on Daniel Briere, who had clearly hooked Radek Bonk. A close-up replay revealed that Briere had actually speared Bonk with the blade of his stick in the stomach. While a referee skated to the penalty box with the door open on the Sabres side, Briere began vehemently arguing and the door was closed. An official then skated across the ice and a door to the dressing room corridor was opened and it was assumed Briere was getting five and a game. Meanwhile the Sabres captain was still jawing away with the officials and Souray present listening in for the Canadiens. Finally, and strangely enough, both doors were then closed, no call was made, and Briere remained on the ice to the total confusion of all Habs present. If no call was being made, why then was the whistle blown with the Sabres in possesion of the puck?

Off the ensuing faceoff, Briere found himself on a breakaway and beat Huet to make it 4-3. If that's not a turning point, I don't know what is!

The Sabres then had the Habs playing on their heels for the final five minutes of the game. It's always a bad sign when you can see a defensemans numbers - your blueliners should be facing the opposition and not their own goal! When things were souring last year for the Habs in late November, I recall this scene playing over and over like a bad movie. It was always 44 and 52 with their asses pointed the wrong way! They were the culprits again on this one.

Some notes about the game:

No worries about Saku Koivu's eye injury. The Habs captain was the best player on the ice tonight.

The Sabres outshot Montreal 37 to 27, with a good half of the shots from the perimeter.

Huet stood on his head, as he did last season. He was questionable only on the Briere goal, but it was a helluva shot. On two goals, the D failed to clear. The second goal was a deflection and hardly his fault.

Three of the four Habs goals came on passes from side to side that beat Miller on the blocker side. He couldn't be blamed for any of them and he also played a strong game.

The trio of Koivu-Ryder-Higgins had a 8 point night. Higgins actually seems faster than last season and I predict a great year for him.

The Kovalev-Plekanec-Samsonov line also had it's share of dazzling moments. When those guys cycle the puck, defenders will be getting dizzy. To think they are no even in sync yet!

Newcomer Janne Niinimaa lived up to everything that is being said about him - good and bad. He took in some PP and PK time and played alongside veteran Mathieu Dandenault. He is useful with his reach and made some good poke checks early on but disappeared to the bench for the latter half of the second after a couple of brain dead clearing attempts. When is Boullion coming back? No later than November I hope.

Rookie Guillaume Latendresse (that's GHEE- OME-LATT-UNDRESS for you non-frogs out there) played about 8 minutes on the 4th line and did well. He had a couple of good scoring chances while throwing his weight around some.

Sabres F Paul Gaustad impressed me alot tonight. His crash and bang style gives Buffalo a 4th line that can alter a games outcome with some gritty and inspired play.

New Habs coach Guy Carbonneau did well in his first game. The Habs controlled most of the play during the games first 50 minutes thanks in part to Carbonneau rolling 4 lines all night and forcing Lindy Ruff to match. The Sabres prefer to roll 3 with extra time for the Briere trio. Carbonneau got the matchup he wanted with Bonk on Briere all night and keeping the Koivu line away from the Sabres top line. It paid good dividends.

In the shootout, Kovalev wrung one of the cross bar before Vanek sealed the win with the Sabres second shootout goal.

Question: Why does Michael Ryder, whose bread and butter is a wicked wrister, go for the backhand deke on the SO when Miller offers him a gaping five hole? I don't know either!

All in all, a decent start for the Habs against my pick for tops in the Northeast. A point gained on the road is never a bad thing. It's never anything to brag about when it should have been two.