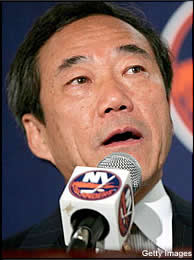 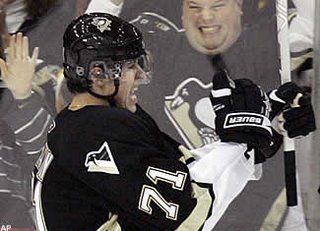 Yes, we all know by now that Islanders owner Charles Wang isn't exactly astute when it comes down to hockey thinking. His latest brainwave is further proof of dementia. I must give him due credit, he does have wild ideas. He is definitely some kind of trailblazer.

Many are of the opinion that when it comes to Wang, the lights are on, but nobody's home. My slant is that the wheel is spinning, but the hamsters dead!

Wang's latest excursion into the realms of Star Trek mottoism has the renegade thinking owner going where no man has gone before looking for evidence of hockey. I can't even begin to put it into words, it's so far fetched. Slapping down this press release is by far the easiest of ways. It goes:

New York Islanders owner Charles Wang has a bold vision for hockey in the People's Republic of China. Wang, the Shanghai-born American citizen, has launched a massive plan, called Project Hope, to create a viable infrastructure in a nation with untapped hockey potential. The program also provides educational opportunities in the United States to young Chinese players and cultural exchanges between East and West.

Although there has been organized hockey in China dating back to at least 1945 and there are two Chinese entries in the four-year-old Asia Hockey League, the sport has yet to truly take off. There are only a few hundred registered hockey players in the country today, and the number of training programs has dropped from about 20 in the early 1980s to three today.

Even if only a tiny percentage of China's 1.3 billion people take up hockey, China could someday develop a deep talent pool. By way of comparison, there are 77,000 registered players today in Russia -- a staggering number, but less than one percent of the country's 142 million citizens.

Okay, I've had enough of this. If you are completely enthralled by this wacked out notion, the remainder of this Chinese acid trip is at this link.

Wang does have all the money to buy up any inner city's Chinatown and put up a franchise. I'll be looking for a want ad in the back pages of the Toronto Star that reads: "Chinese Backup Goalie Wanted For GM Position - knowledge of the entire untapped crop of future Tokyo sharpshooters and knowledge of the CBA an asset, candidate must be willing to surrender all integrity in exchange for a 15 year contract"