Ask Me Again, If I Like Shootouts? / Habs and Sens Tonight 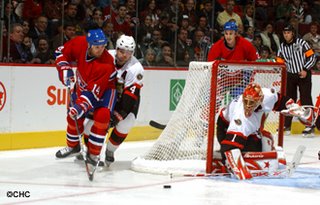 Okay, the Sens did to the Habs tonight what the Habs did to Leafs last Saturday!

It solves a hockey game like a whore cures a hardon! It's cheap, sleazy, and a giving in to easy thrills.While I may have pumped to that outcome in younger days, it hardly settles the score while giving two points to the better team. I realize being a fan of tie games leaves me in a minority. Mistake me not, I was never a fan of ties either, I just found it a better reconsilliation of a sporting result than an individualistic competition.

Would you settle the Super Bowl with field goals?

How about the World Series with a home run competition?

The masters with a round of mini putt, anyone?

Then tell me, die hard hockey purist, why does this fly?

This is the Miss America of hockey thinking. No brains - don't matter! Nice tits - you win!

Just like you, I get sucked into the excitement and endorfins of the moment! Like my analogy to tits - it's alluring! Gimme my pussy and beer and to hell with the ugly morning! The whole deal is pandering to the lowest commom denominator in all our senses and priorities.

Wipe that grin and whatever else off your face!


I have made my ideals on how to solve deadlocks very clear in the past. More conclusive ways of ending a game are within reach of the NHL. You like the 4 on 4 overtime? Play until a winner is decided. Hate back to back games where your favorite teams drags their asses icing the puck the entire third period to preserve a win? Abolish them completely and enable playoff style OT in the regular season. It beats the far fetched 3 point game scenario proposed by some hockey thinkers.

At worst, propose a ten minute OT, 4 on 4 style, and then live with the tie.

Last year, both the New York Rangers and Dallas Stars had inflated regular season point totals due to shoot out wins. They inevitebly collapsed, as they should have, in the playoffs first round. Do we want to repeat the scenario year in and out. It falsifies a teams standing, big time. It may even render an unworthy team playoff bound. Maybe your team - this season.

Imagine the shootout goes ten rounds deep on the seaons 82nd game, and Wade Belak or some non playoff team's 7th defenseman knocks your team from the post season. It's bound to happen!

As for the Habs loss to Ottawa tonight by shootout, I am within my usual 24 hours analysis period, where I get to watch the game over on video, with a pause button as my best friend.

Home openers are bastards to analize. Tonight, without benefit of a second viewing, I found neither team worthy over the other, of victory either way. Ottawa tightened up their play on a night where the Habs obviously sought to entertain with some fancy play. Samsonov's tying goal will be a highlight reel feature for sure. Coming back for the Habs, twice in the game, merits a good word or two - especially the Habs PK duo of Higgins and Koivu stripping the usually defensively incompetant Spezza at his own blue line for their first goal. Ray Emery looked like a #1 goalie to me, while Cristobal Huet, solid most of the night, was weak on the Sens second tally.

A funny scrum broke out between the Habs Aaron Downy and the Sens Chris Neil at the end of the first. It was long, slow, and the refs let both endure a handful of cranium bruising knucklers before the participants tired each other out.

Radek Bonk is a helluva penalty killer. If he scored 10 this year, he's almost worth his millions!

An even game in many regards despite the shootout declaring a winner!