Share All sharing options for: UPDATE ON JIM SEABORN SEARCH 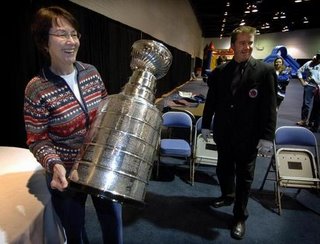 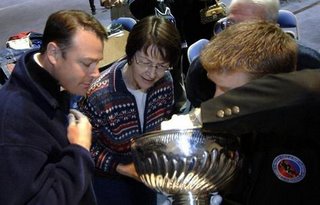 Major progress has been made in Jen Seaborn's search for information on her distant cousin Jim Seaborn.

If you were following a few blogs back, Ms Seaborn is trying to piece together all she can regarding a cousin three generations removed, who had his name engraved on the Stanley Cup in the 1914-15 season.

Jim Seaborn was a defenseman with that years Vancouver Millionaires championship team, and Ms. Seaborn has enlisted me to aid in finding out information on the player and the person her cousin Jim was.

After a multitude of internet searches, I was able to determine that Jim had likely only played for the Millionaires in that one season. In the above picture, you will see Jim as the ninth player counter clockwise, in ovals, on this postcard celebrating the 1915 Stanley Cup win. Few other pictures of Jim exist. It has been determined that he had previously played for the Portland Rosebuds (Buckaroos) and was enlisted in WWI for ten years, returning to play in 1925 for Duluth of the AHA (American Hockey Association). He went on to play for St. Louis, Chicago, Minnesota, and the Kansas City Pla Mors of the AHA, where he retired in 1932.

With the help of some of my research, Jen has been able to connect to a Mrs. Audrey Keyes of Aiken, Georgia, who is the daughter of Jim Seaborn. She has also been linked to the daughter of a second cousin of Jim, via a newspaper article in the Vancouver Provincial published recently, that she was unaware of. Mrs Sue Kane was in the news recently as she had discovered Jim Seaborn's name on the Cup, inside the bowl, no less.

Mrs Kane is a second cousin twice removed, of Jim Seaborn, and was notified of Mrs. Keyes discovery via the internet. It occured when Carolina Hurricanes forward Andrew Ladd visited Richmond B.C, with Lord Stanley's mug.

The inscription of Jim Seaborn's name is clearly seen in the above photo, on the inside of the bowl.

Jen Seaborn would be appreciative of any additional information in regards to Jim, whether it be new photos, U.S. sensus information, or information pertaining to the years of Jim Seaborn's life from 1932 to 1964.
Anyone with leads in these areas can drop a comment in my box and I will forward them along.

Your help is greatly appreciated.