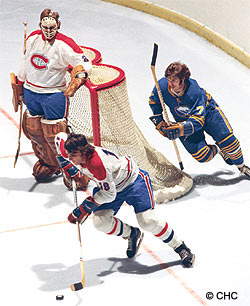 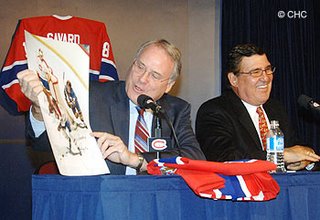 On my blog to do list of works in progress was a general appreciation page on the retirement of Ken Dryden and Serge Savard's jersey numbers. I watched the press briefing on it earlier in the week and made some mental notes on things that were said at the conference announcement.

Scanning the official Habs site days ago, I happened upon these two pics. I thought that they simply said it better than I ever could. I scrapped my planned piece. This made easy work of it.

This is called confidence. Ability, faith, call it what you will. These two ooozed cool on the Canadiens teams of the 1970's.

Imagine a goalie showing this nonchalance today? Imagine him playing for Keenan?

When Dryden pulled this beauty of a shot from an envelope he had with him and displayed it to the gathered media, the press room broke out in fits of laughter.

"You can’t lean on your stick as a goalie unless the puck is at the other end of the ice," laughed Dryden, before pulling out a nonchalant picture of himself looking on from his crease, comfortably leaning on his crossbar as he admired Savard fending off a forechecker.

"Do I look nervous here to you?" asked a smiling Dryden as he again pointed to the photo. "This really says it all. When Serge had the puck on his stick, I knew it was going to leave the zone."