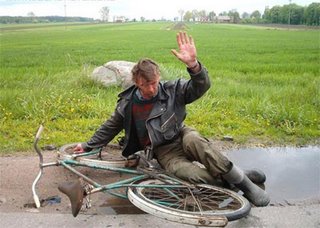 A recent snafu at a Toronto radio station almost ended in tragedy this week when a life long Toronto Maple Leafs supporter took to the QEW in a mad rush to beat what was in essense a non existant ticket line.

A DJ at Toronto's Q 107 inadvertantly cued up the wrong file tape during a morning show this past Thursday. DJ Craven Morehead now says he feels terrible that his slip up almost ended the life of a Leaf Nation die hard.

During the morning show's sports segment, Moorehead was about to air an interview with newly signed Matt Stajan when he accidently ran an archived commercial from 1993 announcing a Friday morning on sale date for Leaf tickets to the 1993 Stanley Cup final.

As we all know, the Leafs just missed out on the historic date, but their appearance in the seventh game of that years quarter final necessitated the on sale date announcement. The unfortunate slip of the archived advertisement was immediatly corrected on air, but not before one Basil McDowell ran out the door in haste.

McDowell, who suffers from a bevy of mental disabilities, including Terret Syndrome - brought on by that very same '93 final, burst out the door of his mothers basement apartment where he resides. Anxious to be the first in line for the precious tickets, an armed with 6 jars worth of small change, the Leafs die hard hit the highway pointing his Prozak enlightened gaze at the CN Tower in the distance.

Within minutes, McDowell, who also suffers from dementia, was clipped slightly by a passing SUV and shoved off to the roadside.

The driver of the SUV stopped to assist but not before a Toronto Sun media type snapped this pic and got McDowell's story and comment.

Moorehead will apparently make a donation to the charity of McDowell choice.