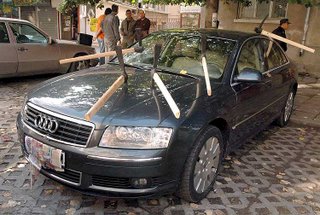 Before matching the Flyers offer sheet to Ryan Kesler, the Canucks GM hopped a red eye to the city of brotherly love looking to settle the score with the former Flyers captain.

A witness at the scene of this meltdown said Nonis was chasing Clarke all over Philly when he spotted the renegade GM heading into a drug store to buy some Pepto Bismol on the city's outskirts. It is said that Nonis' was practically frothing at the mouth when he spied Clarke, who ran off like the chickenshit he always was whenever fights broke out around him back in the Broad Street Bullies glory days.

While Clarke hid out at a nearly Toys R Us disguised under an Islanders cap, Nonis went balistic and emerged from Home Depot with five pick axes under his arm.

He approached Clarke's Audi and literally went to town on it shouting after each swing of the axe," Don't. Fuck. With. Canucks. Again."

Nonis then walked calmy and nonchalant to his car and scooted off, not to be seen again.