Share All sharing options for: My Favorite Season Begins 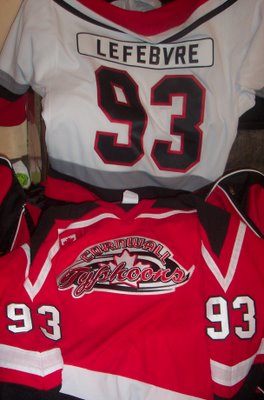 Finally, Reality Check and his daughter Poke Check are hitting the road for a three day tournament in Oshawa Ontario.

I am just as excited as the kid for this first one. The Typhoons have but two games under their belt so far this season - two exhibition losses last weekend - so we're about to find out what this team is made of real fast. The 3 teams we'll be facing are the host Oshawa Lady Generals (the name cracks me up too!), the Durham West Lightening, and a team from London (could be the Lady Knights - who knows!). There are 8 teams in the tourney. If we manage a pair of wins, we'll qualify for the semi final Saturday, and hopefully onto the final Sunday morning.

The girls had a bit of a rough go last weekend. Beleive it or not, the penalty crachdown has made it's way into boys and girls organized hockey. It's kinda nuts if you ask me. In the first game my kid had a minor for holding, two for slashing, five for fighting, an instigator and a game misconduct! No really, she gets called about three times a year, usually tripping when she's flustered. Each game had a total of 6 calls between the two teams.

A funny thing happened on the way to Montreal last weekend - I got lost - and I never get lost. I've been to Montreal a hundred times and know that section of it well enough, but it seems they renamed an eexit or something and correcting my slip cost me 45 minutes of discovering newfound La Belle Province territory.

By the time I got Poke Check to the game, two minutes had elapsed in the second period. She made quite an entrance to the game. After skating to her bench from behind the net, she was put on the ice on the very next shift. A team mate had come off the ice hobbling and my daughter was sent out to replace her. Trouble was, her teams bench door was inside the blue line, and she entered the ice offside as her team iced the puck. Smartly, she quickly tagged up while grabbing the loose puck. With no one near her, she broke in alone and rung one off the post. Unfortunately, that was her best chance of the game.

I took some quick pics of the jersey for TL. I don't yet have an answer on availability or price, but I should soon.

First tourneys are scary - I don't know what to expect yet of this team but I'm staying positive. Hey, I'm tied for first in the WFS pool, aren't I?