Is it Too Early...or have I flipped?

Share All sharing options for: Is it Too Early...or have I flipped? 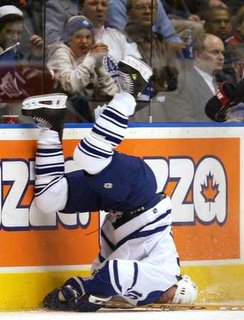 A few thoughts on some preseason action over that last two nights.

While I was searching for a still shot of Evgeni Malkin's cartwheel facesmack over John LeClair's rutspread boardkiss, I found this link to a video of it shot from different angles, but not before Waiting For Stanley beat me to posting it. Check it out! It's a classic bettered only by the Tucker faceplant pictured above! (Note to WFS - A good Friday photo caption, I think! It's all yours.)

Had to laugh during last nights Leafs-Sens tilt. I'm hoping Sens prospect Cory Pecker makes the cut. With Mike Peca on the Leafs side, could we all hope for a Peca-Pecker knucklefest? I'd love to hear any announcer spout, "Pecker and Peca are going head to head!"

Are thinned out rosters making the Bruins look good or the Habs look bad? Of course it's only the preseason, but in Montreal, as in Toronto, every game matters. Coach Carbonneau's head will be guided to the guillotine by opening game if this keeps up.

In Ottawa, all the hype over Alexei Kaigodorov is turning out to be just that. Seems Kangaroorov steers three strides from the boards at all times and fears wrinkling his jersey. John Muckler will soon start to take less stock in his European scouts words if this guy doesn't pan out. His buildup in the nation capital described him as the second coming of another Alexei, the once highly anticipated and now Islander playoff phantom Yashin. They may be right for all the wrong reasons.

Out west, Petr Sykora and Alex Tanguay have done well in debuts with the Oilers and Flames respectively. The Battle of Alberta needed OT to settle the score tonight. Both clubs looked well matched and feisty in their typically contested manner.

Will Roberto Luongo continue his trend of making bad teams simply average in Vancouver. Everything is in place to suggest so. The worrying continues while the Canucks are rebuilding. Waiting For Stanley? Aren't we all!

A curious situation may emerge in the Big Smoke with a three way goaltenting tangle shaping up. What happens if both Mikael Tellqvist and J.S. Aubin outshine Andrew Raycroft? John Ferguson Jr.'s expensive and highly touted reclammation project may be his undoing at seasons end.

I'm keeping a close (not closed) eye on the performances of Jose Theodore in the Avs preseason. So far so good for Theo, as he has been solid in back to backs against Dallas and Detroit. That good news for TL at Jersey's and Hockey Love, as Theo looks to reclaim his elite goalie status after being relegated to media sideshow putz all in the space of one year.