I Read The News Today, Oh Boy! (Or, Spin the Black Circle)

Share All sharing options for: I Read The News Today, Oh Boy! (Or, Spin the Black Circle) 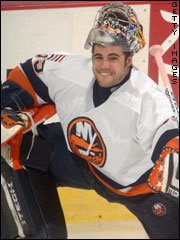 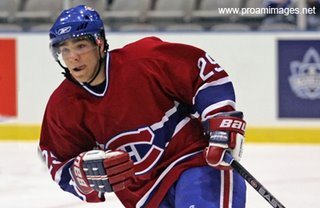 Where to start eh?

Mark down September 12, 2006, down on your NHL history calendars as a twilight zone day for all times.

In no particular order, Mike Keenan crawled out of hiding to throw more twists into an already incomprehensible denoument on the issue of resignation / firing / plank walk. An average goalie was given a contract of never before seen stupity in length and dollars courtesy of the - no surprise here - New York Gilligan's Islanders. A restricted free agent was tendered a contract by a team other than the one holding his rights - a post lockout first. And lo and behold, the Leafs won something.

No this was no pickles before bedtime induced hallucinogenic stroll through the evening sports news - it all happened in actual real time during the last 24 hours.

We'll start with Keenan. The Iron Mike held a press conference to announce that the terms of his supposed willingful but oddly timed resignation had been reached amicably. Usually such a thing needs no negotiating, but this is no usual case involving a dethroned GM. Little mention was made as to why all of this had to come about. No explanation why, that upon a so-called surprise resignation, a successor was prompto announced.

Keenan was esquisitely polite and likely took a week out just to seethe. He swung no hooks, leveled no scores, and belittled what I think of him as a man by falling off the radar of truth in an effort to remain a commodity in the NHL coaching ranks. Jacques Martin was never mentioned and he publicly thanked a man who'd fired him for doing a pretty good job in the given timeframe. For wilting out, I now rename him Ironed Mike!

On Long Island, the magical mystery tour that remains the Islanders, signed goalie Rick DiPietro for the balance of eternity, almost. The maybe one day star will receive a whopping $67.5M over a 15 year spread whether he is dead or alive. This is astronomically absurd for more reasons than there are adjectives for the word idiot. Like my kid enjoys saying, "This is dumber than stupid!"

TSN's Bob McKenzie, put it this way."This contract, outlandish as it may be, won't hamstring the franchise as badly as Alexei Yashin's 10-year deal, but it is symptomatic of an NHL club that is, at best, non-traditonal, and at worst, totally dysfunctional. Make no mistake, this was a Charles Wang production from start to finish. Neophyte GM Garth Snow was only along for the ride".

In my opinion, even if this mess works out, it could be trouble. What happens if, say in five years, DiPietro pans out to become the elite goalie of the league. While earning the roughly 4M per annum, another goalie warrants 8M from his team as it's best player. Does DiPietro hence, become underpaid? For a decade of the deal? Trouble brewing.

The goalie is being quoted in the most polished of spit shined spins as saying something akin to "I always wanted to be an Islander for life!" Really! Like who in their right fisherman's boat has ever said that!

Wang, for the sake of hell, has learned little from the "Cash In By Yashin" that has never given the club an once of dividend.

Obviously, this story cannot be simply contained by one mere blog post. I'll have to save the boiling thrust of adjectives likened to this monstrosity of whiplash common sense for another post sometime soon.

In Philadelphia, the ever clever GM Bob Clarke, who recently back noosed himself into the Simon Gagne, tended a 1.9M offer sheet to Canucks RFA Ryan Kesler. Vancouver will obviously match it, awaiting the day not too far from now when Flyer future stars Jeff Carter and Mike Richards reach RFA status themselves. Canucks GM Dave Nonis can extract a hellish payback by signing either to a larger bait, thus sending Clarke and his Flyers into the upper nether regions of salary cap madness.

Once a twit, always a twit!

Finally, the Toronto Maple Leafs have won the Cup. Okay, not that cup.

In an all-rookie tournament at Toronto's Ricoh Colosseum, the Buds rookies took the Habs hopefuls by a 3-2 margin. They now lay claim to the Rookie Cup cup, thingy...whatever it's called. Who cares?

It is said that the Leafs team averaged something like 15 months of age older per player than the Hab iced team - but that's picking at straws. I've always said, all that matters is Cups. Well now the Leafs have one. Place it next to a cup of Tim Hortons in importance.

I must, for the sake of my own sanity, end this post with a little long overdue common sense. The Montreal Canadiens will finally retire the jersey numbers worn by goalie Ken Dryden (as long as he doesn't win the Liberals leadership nomination) and former GM and legendary defenseman Serge Savard. 'Bout time!

Now where did I put that vice?