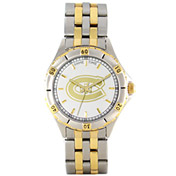 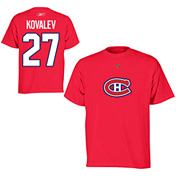 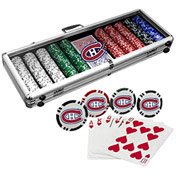 I thought I'd give a little peak into NHL.com and check out some team collectibles and memorabilia. I was suprised to see how much stuff (read junk) that was on display and up for sale. Not much of it is cheap either. Cruising throught the Habs section I found some 212 items. These pictured pieces are the high and lowpoints of the set.

From left to right, top to bottom:
1-The atrocious pink womens replica jerseys - you'll never see these on a guy, ever!
2-Habs dynasty banner - you won't find these at BuffaloSabres.com.
3-Montreal Canadiens bucket - there's a joke here I don't get.
4-Autographed Henri Richard photo - fifty bucks, divided by eleven Cups
5-Doug Gilmour Habs card set - 20 in all - too bad he didn't get here earlier!
6-Gold Habs watch - how much time left till the next Cup?
7-Numbered T Shirts - way cool and cheaper than a jersey. I'll take three!
8-Habs Poker Chips / Card set - If Doug Harvey was still alive he'd own these and get them signed by Tocchet
9-Jose Theodore action figure - same pose as plain clothes version that has him wiping out on his front steps.
10-Pete Mahovlich action figure - why the Little M, where's Frank?
11-Habs Bendo - Looks just like Ribeiro and whines if squeezed.
12-Guy Carbonneau RC - $14.99 in Montreal, $5.99 in Dallas, $1.99 everywhere else.

I imagine each teams site has a whack of these items for sale. My search for Leafs crying towels white screened my comp before it crashed, so I'm not going there again! I did find a nifty Pat Quinn windup doll that spewed excuses with each crank and some Mighty Duck balloons that claimed to be "Unprickable by Brian Burke!"