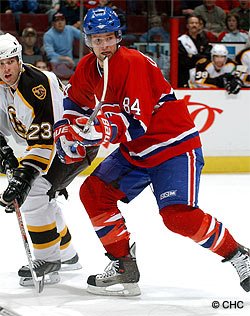 First the bad - the Canadiens lost the opener 5-2 - no biggie.

The good - Saku is back and showing no signs the eye injury suffered last season is impairing him any.

While a preseason opening loss to the Bruins was not the way the Canadiens had hoped to kick off the 2006-07 season, the sight of captain Saku Koivu at his usual post Tuesday night had everyone in both the Bell Centre and the Habs’ dressing room breathing a collective sigh of relief.

Skating on a line with usual sidekicks Michael Ryder and Christopher Higgins, the Canadiens’ captain was up to his old tricks, helping set up Ryder early in the second period for the Canadiens’ first goal of 2006-07. While Koivu would have much preferred a different outcome to open the preseason than a 5-2 loss to the Bruins, he was glad to finally get his first taste of game action.

"The eye felt fine," said Koivu, who is also adapting to the use of a new larger visor that comes down lower and closer to his face. "It’s going to take some time for me to feel really comfortable but it reacted well. I had to look down at the puck a few times but that’s just going to take some getting used to.

"Saku has a lot of character. He works hard and he’s our leader, our captain," reaffirmed Steve Begin. "He answered the call and we obviously need him out there. He suffered a serious injury, but knowing Saku, he’ll do everything he possibly can to never let that show."

As for the game itself, it played out as a preseason game often does. Timing issues, rookie mistakes, and general cohesion ruled the evening.

With the Canadiens dressing only 11 regulars, many rookies were given a shot at a longer stay with the team.

Most did not fare too well as the Habs got into early penalty trouble and never recovered. Craig Rivet, who can always be counted on to take bad calls due to overexhuberance, replayed the old movie midway in the first, receiving four minutes for holding and hooking infractions. Within minutes the Bruins were up by two and the Habs fate was soon sealed. After another call resulted in the Bruins third goal, it was pretty much game over.

Defenseman Jon Gleed and Ryan O'Byrne had trouble on penalty kills clearing the net. Gleed himself, was caught way out of position on two Bruins goals.

Beginning with the second period, the Habs settled down some when Koivu set up Ryder nicely to put the home team on the board.

Guillaume Latendresse and Carey Price impressed the most amongst Habs rookies. The enigmatic Latendresse made a nice split of the Boston D when he was hauled down. On the ensuing penalty shot, he threw some nifty moves that didn't fool Bruins goalie Tim Thomas, but it was something to see nonetheless. Latendresse made amends in the third, one-timing a powerful Bossy-like wrister past a rookie Bruins goalie to make the game closer.

Price was even more on the mark, stopping 21 of 22 Bruins shots fired at him, including a robbery of a save on Glen Murray point blank.

In all the Habs were outshot by the Bruins, 38 to 21, a stat explained by the 13 penalties taken in the contest. The more disciplined Boston team were handed 6 calls.

The Canadiens line of Kovalev-Samsonov-Ribeiro did not dress but should see action in tomorrow nights contest.

Coach Guy Carbonneau cited inexperience as well as indiscipline for the loss.