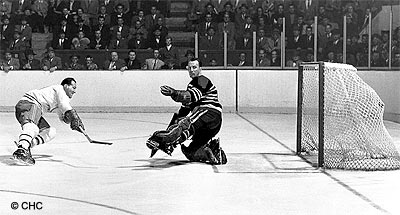 It is with deep regret that the Montreal Canadiens announce the passing of Floyd Curry, who died peacefully at the Maimonides Geriatric Centre in Montreal Saturday morning.

Born in Chapleau, Ontario, on August 11, 1925, Curry spent his entire 11-year NHL career with the Canadiens. Before joining the Canadiens, he won the Memorial Cup with the Oshawa Generals in 1944 and the Allan Cup in 1947. His four Stanley Cups made him one of a handful of players to have won a championship at all three levels.

The reliable right winger enjoyed his most productive season in 1951-52, when he notched a personal best 20 goals and 38 points. He carried that momentum into the postseason that year when he tied for the NHL playoff scoring lead with seven points in 11 playoff games. He played 601 games with the Canadiens, amassing 105 goals and 204 points. In 91 playoff games, Curry scored 23 goals and recorded a total of 40 points.

Perhaps his most memorable moment came when he recorded the only hat trick of his career with Queen Elizabeth in attendance on October 29, 1951 as the Habs defeated the New York Rangers 6-1 at the Forum.

Following his playing career, Curry coached the Montreal Royals before returning to the Canadiens family where he spent over four decades in various front office capacities including Director of sales and later as the team’s travel secretary.

One of Curry's duties while employed with the Canadiens was to scout the teams prospects at each level and report back to the team on their progression. During the 1970-71 campaign, Curry took in many of the Nova Scotia Voyageurs games. The Habs main farm team that year (the Canadiens had several) was an average squad just meandering over the.500 mark, as they were pretty thin on defense. Curry watched road games and reported to the Habs brass that the only thing keeping the Voyageurs from losing was the play of rookie goalie Ken Dryden. Curry was so high on Dryden, who was making 45 to 50 saves a night, that he told one reporter than if Dryden were in the NHL at present, he would guide whichever team he was playing for straight to the Stanley Cup. No mean prediction!

Dryden of course, likely due to Curry's evaluation, found himself in Montreal with 6 games to go in the season and played well enough to wrestle the starting goalie's job away from Rogie Vachon. The rest, as we all know, is history!

Curry is survived by his wife of 61 years, June, his children Dawn and Candace and several grandchildren.