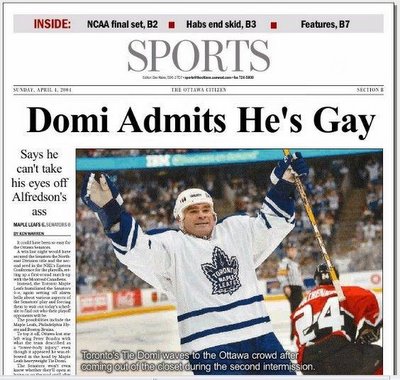 Some things should just stay in the closet!

Recently retired former Toronto Maple Leaf enforcer Tie Domi may have wished he had not scorned his now ex-wife Leanne Domi. Maybe he owes her a favor for attempting to cover up his sexuality by blaming Belinda Stronarch for their breakup. Mrs Domi was likely thinking of her children when she dragged out the age old infidelity angle, saving her ex-husband from embarrassment.

Unbeknowst the either of them, the shit is about to hit the fan courtesy of a snooping Ottawa Citizen reporter. A source close to TSN has leaked information that Domi wanted the TSN job badly in order to be close to gay lover Tony Twist, a former enforcer himself with the St. Louis Blues. The source, who did not want to be identified as Bruce Garrioch, says the couple met inside the Penalty Box, which is not an area near the rink surface, but a little known gay bar in Toronto frequented by homosexual hockey goons with a slightly offbeat love for the rough stuff. Arrarently, Domi was seen crying in Twist's arms the night he was jilted by Daniel Alfredsson. "He had it bad for Alfie", said the mole, "but then Daniel cut his hair and Tie went to pieces. He was so lonely, he sent letters of apology to Ulf Samuelsson, and begged forgiveness and struck up a friendship".

Domi and Samuelsson were fast friends, but it all ended when Ulf apparently got wind that Tie was only using him to learn Swedish pickup lines he would later use on Alfredsson.

"All he ever talked about was Alfredsson ass", said Samuelsson through an interpreter.

The Citizen tried corraborating the story with Domi's former Leafs team mates, but only Doug Gilmour was slightly approachable. When Gilmour was asked about the scandal he had only this to say:

"Look, the story's so fucking old it has dust on it. I didn't touch her, I wasn't sued, and I was traded to Calgary for no other reason than Coxe, Corkery, and Mike Bullard!"

Getting back to Twist, regulars at the Penalty Box offered a small glimpse into the goon's tryst with Domi. Stephane, a waiter/buffer/fluffer at the Box said often the pair would slip incognito into a champagne room where squeals would soon be heard. When a crowd would gather to watch, Domi would threaten to punch out the entire establishment, before being overtaken with Twist's charms.

"Tony would get behind him and grab him in a headlock, reach around Tie and tweak his nipple 360 degrees", says Stephane. "Just when Tie would begin struggling like a wet boar in a quicksand, Tony would...."

Okay that's enough. We get the picture!