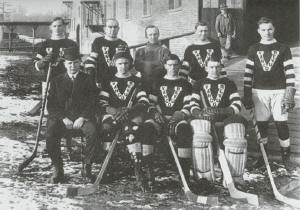 RC NOTE - I am requesting the assistance of anyone willing to help someone out by doing a little internet detective investigating. I'm asking this on behalf of a reader who queried me by e-mail in regards to a post gathering dust in my archives concerning the Vancouver Millionaires Stanley Cup win in 1914-15. It certainly picked my curiosity to say the least. The letter from one Jen Seaborn read:

Your page on the Vancouver Millionaires was a great read. Do you know which player is which in the team photo and is it possible to have a version of it enlarged? As you have probably noticed, one of the team members and I share a surname. Jim Seaborn was a cousin. I have always thought the fact that he was on a Stanley Cup winning team is amazing. Are there any other sources of information you could recommend for researching him?

I quickly replied to Ms. Seaborn inform her that the pictured player was none other than the legendary Cyclone Taylor, and unfortunately not her cousin Jim.

I offered to help out in any way I could in regards to hockey research, noting that "internet databases are relatively new and not that deep". In short, there may not be all that much out there in cyberland that isn't incomplete, dubious, or redundant. I asked that she share any known information on her cousin that may help me point my searches in the right direction.

Ms. Seaborn replied enthusiastically within a day and supplied the following information. I was stunned, primed, and on the case. Her letter included many facts both clear and hazy. Jen obviously wants badly to ascertain that it is in fact her cousin ( removed by genarations) whose name is on Lord Stanley's mug! Hey, who wouldn't!

She also seems highly intent on piecing together a somewhat fragmented family tree over the past one hundred years.

I have no definitive proof that my cousin Jim Seaborn and the Jim Seaborn on the Stanley Cup are the same man. However, hypothesis is supported by the following items:

• Cousin Jim was born in 1892 making him about 23 in 1915 – the right age to be playing professional hockey;
• Known to be very athletic – born out by item after item in the Winnipeg newspapers;
• Seaborn is a fairly rare name;
• My daddy said that the Jim Seaborn on the Stanley Cup is Cousin Jim

Unfortunately I know very little about Cousin Jim and his branch of the family, but will share the relevant bits identified to date. James "Big Jim" Seaborn was born in Manitoba March 6, 1892 in Manitoba, the 4th of 8 children. Parents were Thomas James and Elizabeth (Neely) Seaborn.

My dad told me that his father told him that Jim was a professional hockey player and won just about every athletic competition open to him from a very young age. Other branches of the family might have memorabilia. My branch currently has unsubstantiated rumor. I will email a cousin in BC and see if she heard anything about Jim or knows where there might be some memorabilia lying around.

An article in the Vancouver Courier, dated March 24, 2005 says that "Jimmy Seaborn" moved from Portland before beginning the 1914-15 season with the Millionaires. I see only one Seaborn in the 1910 US census in Oregon; CC Seaborn roomed at a boarding house in Portland ans was born in Illinois in about 1871. (That would have made C.C. 45 years of age when Jim was 23 in 1915- RC) There were pro hockey teams operating in Portland at the time so Jim could well have been playing for one of them. Jim was still in Winnipeg in 1911 when he appeared in the census with his family on Boyd Street. The 1921 census is not yet available. However, Jim's branch of the family does have ties to the Vancouver area as this is where his father died (1926) and two of his sisters were married (1925 and 1927). It seems that many folks from Winnipeg moved to Vancouver so these family events may or may not be any relevance to Jim playing there. The 1921 census is not yet open to the public.

From my end, I was able to inform her and confirm much of what we'd already both known.

Jim Seaborn never played in the league known as the NHL. He is likely not one of the pictured players in the Millionaires group photo at my blog - the most common known shot of that team. As the Stanley Cup has 12 names engraved including Jim, this photo has only 8 players abd was likely taken at the start of their innaugural season before others players were added, purchased, or traded for to fill the lineup.

Through a multitute of old time semi pro hockey league databases I was able to conclude that Jim was a defenseman and played for five teams in the CHL from 1925 to 1932. The most complete profile was from the Hockey Database website I'm sure many of us use for an occasional resourse. On this link you will find his stats and follow his career from city to city. I consider this crucial information, especially his final, second stop in Kansas City, as he may have returned there at age 40 for reasons of family moreso than hockey. I just guessing, mind you, but I imagine it a calcualted one.

By the way, not bad stats for a defenseman of that era.

The CHL in it's day did have many individual awards, none of which Jim won. Also making information hard to come by, is the fact that those small American hockey leagues shifted teams quite often in search of stability in those years.

I was not able to come up with any playing information or stats for the years prior to 1915 and betwen that year and 1925. That missing decade surely holds clues as to where Jim Seaborn may have settled and raised family.

Most interseting note of my search so far was finding a Vancouver Province article dated this August 24, 2006. It may be what started family members searching for background on Seaborn to begin with.

The article details the findings of a Richmond B.C. woman named Audrey Keyes, 63, when Carolina Hurricanes forward Andrew Ladd took the Cup home that day to his hometown celebration. Upon Mrs. Keyes discovering her cousin Seaborn's name on the mug, a story was issued in the paper. The article drew attention from a woman from the Prairie named Sue Kane, 74, who got in touch with Keyes alerting her that they were long lost cousins who shared the Seaborn ancestry. It told that they would be reuniting soon and that they were both curious to find missing links in Jim's story as well as the shared family tree.

Jen is currently scouring the sensus' taken in a multitute of northwest U. S. and Canadian cities. Many of these do not release information for up to 100 years, I am told. As she backtracks through her ancestry, clues as to Jim Seaborn's path through life, will surely reveal themselves.

I will keep posting on this subject for as long as the search goes on.

I am wishing that all bloggers who come in contact with this post tag along with the search and comment findings or e-mail me at realitycheck-time@hotmail.com. If you know of any search engines, websites, or databases that could help this progress along, I would appreciate each singlelead you can offer.

I'm sure Jen would appreciate it more than you can imagine.

Drop me a line.