Bring on the Pre Season

Share All sharing options for: Bring on the Pre Season 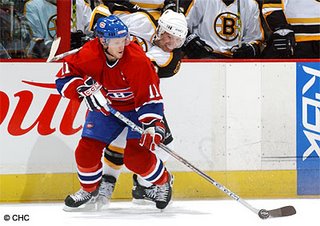 The Habs open up their preseason schedule tonight, hosting the Boston Bruins in the first of back-to-back matchups at the Bell Centre.

Captain Saku Koivu will be seeing game action for the first time since suffering an eye injury in the first round series against the Hurricanes last spring. With Christopher Higgins and Michael Ryder on his wings, the trio will look to build on the chemistry from last season. Forwards Ben Maxwell and Matt D’Agostini as well as defensemen Ryan O’Byrne and Jon Gleed will all be introducing themselves to the Bell Centre crowd tonight. Maxwell and D’Agostini will skate with Guillaume Latendresse, who is in his second tour of duty at the Canadiens’ training camp. Last year, the right-winger, now 19, notched five points in four preseason games.

Not in the lineup in the Bruins’ 5-0 loss to the Devils on Sunday, Phil Kessel, Boston’s first choice in the 2006 draft, will also be making his preseason debut. The fifth overall pick back in June, Kessel will center Marco Sturm and Glen Murray.

Cristobal Huet will get the honor of being in nets when the first puck drops tonight. The Grenoble, France native will share the goaltending duties with Carey Price, who will take over mid-way through the game.

The news out of the Canadiens camp so far concerning Koivu has been encouraging. Other than the fact he will need cataract surgery at seasons end, Koivu has been his regular self on the ice and in scrimmages. On most days, he has been described by those on hand as the best and most determined player on the ice. In other words, his usual self.

In regards to Latendresse, those stating he was the odds on favorite to make the team after last years excellent camp are now reserving their judgement for a later date. Seems Giu's maturity and consistancy are in question, with his health being of secondary concerns at this moment. From the sound of it, Latendresse could either become the next Stephane Richer, 50 goal scorer, or the next Stephane Richer, the moody winger with a million doallar talent on a ten cent head. Time will tell.

Back after the game with a report.