ZANSTORM MADE ME DO IT! - Reality Check's 5 Wacky Facts

Share All sharing options for: ZANSTORM MADE ME DO IT! - Reality Check's 5 Wacky Facts 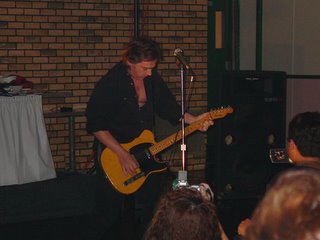 True to my nature regarding rules, I will only half comply with this one!

You get the 5 facts, but I only play tag on a chesterfield with my wife!

Everybody starts with the rock and roll stuff, so I'll lay that on the line first. In high school, my fellow friends nicknamed me the Rock and Roll Encyclopedia because I knew everything about every band going. I retained alot of that shit to this day. Trivial matters like who wrote this song and who played guitar on that song kinda stuff. If only I'd put my powers of memory to good use instead! You cannot help what sticks to your brain I guess. The passion I have for hockey is the same passion I have for music. I currently own two guitars, a Telecaster copy and a Fender strat. I have in my music collection, over 700 vinyl albums and some 300 discs. They range from the Clash to Yoko Ono, and Metallica to Johnny Cash. Rock, blues, soul, and punk make up the majority of my tastes. I have written songs since the age of 14. Some of them aren't bad. I have never had illusion about a music career - I gave myself that reality check years ago! I am a self proclaimed expert on the Beatles. Ask me anything about them, you will never stump me. I have attended over 100 concerts - I lost count long ago. Lyrics are what make a song for me. That and passionate guitar playing. I don't like the sappy shit that passes for mainstream these days and don't even talk to me about rap. There must be thought involved as well as artistry. No headbanging brainless hatred thrash for me. The music has to be either cheap thrills for harmless fun or intelligently human and spirit rousing. To that end I have seen KISS 13 times and Bruce Springsteen 17 times. I'd say that covers quite a range. To me, the Boss is the King of Rock and Roll when he wants to be!

My favorite tunes are "Helter Skelter", "Sweet Child O'Mine", "Born To Run", "Whole Lotta Love", and "Layla". That could all change tomorrow!

NUMBER TWO
This is a terrible admission, but damnit, I work for a living. Other than the papers I write for, I am employed at Kraft Canada. All day I see nothing but cheese and come home to a wife listening to Celine Dion. Surprisingly, I have no suicidal tendencies! (and yes I seen them live also).

I recently apppeared in an episode of Creepy Canada. I played a priest at the Cornwall jail, who was the confessor for a murderer. The man died at my feet in the scene. It was episode 10 of the current season. I was paid the handsome sum of $50.00 for my complete lack of acting ability. My kids got an incredible kick out of it - which was the whole point of it! An experience to say the least.

I have been in a KISS video, in a Rolling Stones book and I can be heard wailing on a live Blue Rodeo album. All by some form of dumb luck! In the KISS video set "The Second Coming", my silhouette is seen from behind at the KISS KONVENTION in Montreal in 1996, while the band plays an acoustic version of "Black Diamond". On the Blue Rodeo live album "Just Like A Vacation", two songs of which for recorded in Cornwall, I hear myself hollering right after "Dark Angel", faintly in the distance. In September of 1981, I saw the Stones at Rich Memorial Park in Buffalo, where the Bills play. O.J. Simpson's number is retired and displayed between the first and second levels. Opening bands that day were George Thorogood and the Delaware Destroyers and Journey. Just prior to George hitting the stage, flashes went off and I started jumping up to see what they were. Three years later I purchased a book commemorating the tour. It had a full two page spread of the Buffalo crowd. I went to great lengths to find myself in it, even using a magnifying glass to examine each tiny head amongst the 80,000 there that day. I didn't find it at first. Looking it over again days later, I realized the biggest head on the page, stuck closely to the crease in the two-fold was me. I have been offered over $200.00 for that book by a Stones collector. I still own it.

When I was 8 years old, my father took me to my first hockey game. The year was 1970 and the game was the Quebec Ramparts vs the Cornwall Royals in the QMJHL. The Ramparts would win the Memorial Cup that season, and Cornwall would win it the following year with Richard Brodeur in nets. The only two hockey players I could identify at that young age were Jean Beliveau and of course, Bobby Orr. Ironically, in hindsight, Orr would win the Stanley Cup with the Bruins that year, and Beliveau would follow suit with the Habs in '71 before retiring. Both players wore #4. Talk at that game was all about another #4. This one was having a bad game halfway through. Friends of my father seemed to ridicule him, as he was practically invisible through thr first half of the game. Much of the discussion and debate on this player centered around the fact that it pretty much assured that the Montreal Canadiens would be choosing him with their first overall pick in June. With the Royals leading by three goals late in the second period, this player took wings and scored a beauty of a goal. The crowd hushed. Early in the third, he blasted a slapshot and a high wrister to knot up the score. With 5 minutes to go in the contest, he went through the entire Royals team for the go ahead goal. When he scored the insurance goal only 30 seconds later, he was no longer being mocked by the local crowd. I swore to my Dad, that if this player was in fact drafted by the Habs, that I would be their fan for life.

The player was Guy Lafleur. He's probably the reason I am sitting here typing this!

NOTE: One pic is me, one is the only Boss I listen to, the other is my telecaster copy.