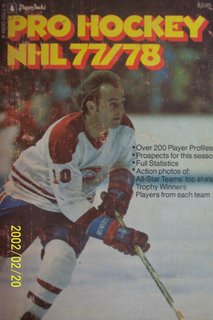 Digging through a dust covered book bargain bin awhile back I uncovered this gem from years gone by called "Pro Hockey 1977-78" by HHOF journalist and Toronto Star columnist Jim Proudfoot.

I had dozens of these paperback precursors to the "Hockey News Yearbook" in my teens. In hindsight they probably had alot to do with why I ended up having a hockey blog.

If ever you see a chance to pick one of these up, grab it. It could be a treasure trove of long lost information and memories. The worst it could do is make you feel old.

The NHL has sure gone through a revolution of sorts in the almost 30 years since this book was published. I skimmed through it quickly and made note of things said concerning players we would all remember today. The book is filled with anecdotes, quotes, and stats on over 200 players.

In 1977, the NHL was an 18 team league and John Ziegler was beginning his reign as president. Four franchises that began the season are no longer with us. The Colorado Rockies (who were once the Kansas City Scouts) became the New Jersey Devils within 5 years. The Atlanta Flames soon moved to Calgary. The Cleveland Barons (originally the Oakland Seals), after this season would merge with a troubled Minnesota North Stars franchise that eventually found its way to Dallas. Curiously, Atlanta, Minnesoata, and Colorado, would all return to the NHL by the year 2000, and the state of Ohio is now represented on the NHL map by Columbus. The wayward Oakland Seals, (or was it the Los Angeles Oakland Seals of Golden California! - Hey maybe that woulda worked!) have their former territory taken up by the Sharks and Ducks.

For the sake of time travelling, the '77 season ended with the Montreal Canadiens winning the second of what would be four consecutive Stanley Cups. If you were a teenager at the time, it is likely you had a poster of Farrah Fawcett or Cheryl Tiegs on your wall, were enlisted in the KISS Army, and watched the Fonz ooze his cool on Happy Days.

Each team in the book has categories listing the previous years finish, predictions on the upcoming year, as well as naming the strengths and weaknesses for each team. For the Canadiens, it reads like this: Strengths - too many to list, Weaknesses - too few to mention, first place - Norris division, Stanley Cup.

Not exactly a bold call at the time.

Other strong teams in the league at the time were the Bruins, Sabres, Flyers, and Kings. The NY Islanders were piecing together their dynasty and were said to be in need of scoring punch. They were a year away from Mike Bossy.

In the 1976 season, legendary Bruins defenseman Bobby Orr was traded to the Chicago Blackhawks. Boston had basically given up hope on Orr's knees ever recovering from the multitude of operations they had undergone without success. He appeared in 20 games with the Hawks, registering 23 points.

There seemed to be some optimism for Orr, as he had just led Team Canada '76 to the Canada Cup win and was named tournament MVP. After the initial stint with the Hawks, Orr was headed back to the operating room for the sixth time. Reality was setting in on Orr, as he remained cautiously optimistic.

"They've told me I'll have to be on crutches a few months, then a cane and I'll have to stay off skates a year while I build up the knee, " Orr said. "After that - well you never know. Look at what Lowell McDonald did." (McDonald had to stop playing hockey in 1970 because of extensive knee damage. He took two years off to rehabilitate his legs and rejoined the Pittsburgh Penguins for the 1972-73 season. He's been a useful left winger for five seasons since that amazing comeback.)

"So I'm encouraged to believe there's at least a chance," Orr said.

In the meantime, Orr was expected to assist new coach Bob Pulford behind the bench.
He did make a valiant attempt to return in the 1978-79 season, appearing in only 6 games.

On November 8,1978, Orr announced his retirement from the game. President Ziegler said, "It is with sadness that we receive Bobby's retirement. Bobby's skill, competitiveness and determination are already legendary. The discipline and dedication that it took for Bobby to come back and play this year are probably unequaled in professional sport."

In Toronto, Roger Neilson was slated to become the Leafs new head coach. Things were definitely looking up for the Leafs who had a young nucleus formed of captain Darryl Sittler, Lanny McDonald, each with 90 points, and defenseman Borje Salming (78 pts) and Ian Turnbull (79 pts). The foursome seemed poised to lead the Leafs on to greater days.

Flyers captain, Bobby Clarke, called Sittler "the best center in hockey", while Bruins coach Don Cherry added " if I were to build a team, from all the centers in the league, I'd take Sittler first.

Sittler's outlook on the Buds hopes were on the up and up. The previous season, the 27 year old set an NHL record with 10 points in a single game and tied another with a five goal game in the playoffs. The man who scored Team Canada's tournament winning goal stated, "While I'm proud of all accomplishments, none of it is going to mean much until we win the Stanley Cup. With the club we have here, I think it is only a matter of time before that happens."

In Vancouver, sophomore Rick Blight (I don't remember him either!) led the Canucks with 28-40-68 totals. Derek Sanderson, a renegade of a cowboy, with a multitude of ongoing issues and addictions was traded midseason to the Canucks and responded with 16 points in as many games.

Sanderson's lifestyle of sex, drugs and rock and roll, had caught up to him in several ways, and was constantly threatening to derail his career. In 1972 he had jumped to the WHA (playing all of 8 games for the Philadelphia Blazers) at the lure of millions only to come crawling back to the NHL, broke and with his tail between his legs. After failing in Boston, New York and St. Louis, Sanderson rolled out his overused cliche of remerciments to the Vancouver organization. For the third time in as many seasons, he strolled out, "These people here has stuck their necks out for me, so it's up to me to do the job for them". Canucks GM Jake MIlford countered, "There's no question what a player like Sanderson can mean to a team. He can take us a long way if he feels like it". In the end, the cowboy would be Milford's guillotine - Sanderson did not make the team in 1977.

Bruins rookie defenseman, Mike Milbury was about to enbark on his second season with the Bruins. The book reveals that the future genial GM of the Islanders got a late start in hockey, only learning to skate for the first time at age 13. His progression, if you will, was somewhat rapid from there. After being recruited by the Collgate University football team, he then switched to the hockey program after two years. He played two years with the Bruins AHL affiliate where he was coached by Don Cherry.

The book details how Milbury worked hard on his game to remain an NHL regular.

"Coach Cherry told him he had to learn how to wheel and skate back into corners of the rink, and that was something he finally mastered in private workouts, getting his wife to shoot the puck past him into the end zone."

The book does not detail whether Mad Mike actually had to fend her off the puck or not.

The black and white picture featured at the top is a shot of Milbury, as Bruins coach, clubbing a fan with the same shoe he'd tossed at the coach seconds earlier. Believe me, I couldn't resist!