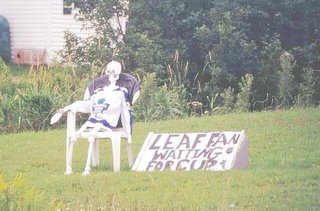 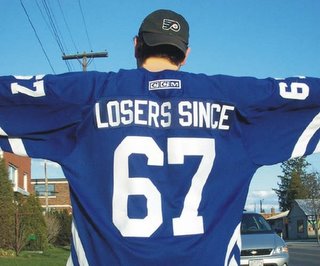 The picture on the left is Craven Morehead, Leaf fan since for ever. He went on a hunger strike in May of 1993 in protest of the Leafs then 26 years drought between Cups. Sensing that his Leafs would soon topple the L.A. Kings and proceed to dismantle the Canadiens in the final, he added himself to the Buds worthy cause figuring he would not be left to die in vain. He survived on water and bird droppings to find out 12 months later that the New York Rangers ended their 40 year curse. It gave him some hope. He added worms to his diet and took on a little strength, but took a turn for the worse when the Red Wings achieved the 95 final. By the time the Devils had swept the Wings, Craven was despondant. His friends (Okay, three pidgeons and two seagulls) had tried to persuade him to give it up, telling him it was only a game. It was too late. By October of the next season, he was goners. That's when the crows got to him. Thankfully, they had no appetite for the Darryl Sittler retro jersey!

The second picture is 39 years old Bower Stanley, named after the Leafs great goalie of the sixties. He was born a week after the Leafs last cup was won. Tired of waiting for the Leafs to make his dreams come true, he switched allegiances as a 7 year old, and became a Flyers fan. Next year, Philadelphia won the Cup.

Is there a lesson in this? Yes, you guessed it - eating bird droppings will kill you!

Here's hoping that the master of photo clip art, the one and only Ingmar W. Bergman, can crop Mr. Morehead's bony picture into a proper logo for a Waiting For Stanley jersey. The suggested jersey # of Mr. Bower's would look more than appropriate on the reverse. Good luck men!