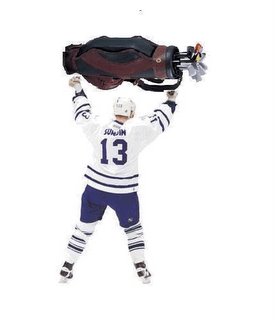 With NHL rosters about 90% finalized and only a few remaining free agents of quality left on the market, it will soon be time to toss off the annual predictions. Early you think?

Consider this. By the second week of september, both the NHL Yearbook and the Hockey News Yearbook will hit the newsstands. They are pouring over stats as we in the blog world certainly are, polling various hockey braintrust, busy perusing the goalcreases of their collective craniums to get it all down just right. Either that or they are flowing in a stream of Captain Morgans, allowing the rum to beat the drum.

In any event, by the weeks end, I will dare a complete rundown of what I think will unfold over the coming season. From team standings, to the scoring race, award winners, and lo and behold - a Stanley Cup Champion!

Nuts am I? Probably! In all likelyhood, I'll be fifty percent wrong.

But so what I say! Pedictions are usually for the birds. Fodder for conversation and debate and ridicule. Hell, I can't do worse than Zanstrom's alcohol fueled boldness. At least I'll get all my teams in the right divisions!

As for a preview, I gazed into my recently spit shined crystal ball and watched Leafs Captain Mats Sundin nail a hole in one at some rundown pissy little par-three course south of Hamilton. No, there wasn't a sign of leaves on the trees, but wouldn't you know it - I would have been wrong right off! I had him finishing the season in an Oilers jersey.