MY FAVORITE THING IN THE WORLD

Share All sharing options for: MY FAVORITE THING IN THE WORLD 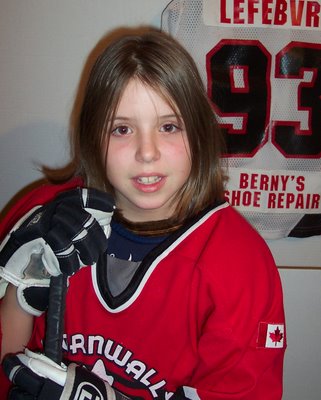 There is absolutely nothing in the world I would rather be doing than watching this beauty play hockey.

This is my 11 yr old, she has been playing now for seven years. Two years back she was 2nd on her team in scoring with 28 goals. The following season she had 23 goals in her first year of Atom. Last year she made the big jump to travel team. She led her team in assists with 20 and finished 4th in scoring with 26 points. Her team won three tournaments, qualified for the provincials, and won the Ottawa District Women Hockey League championship. Her team is from a little town of 45,000 people, but it still outdueled the big city chicks from Ottawa, Kanata, Nepean and Gloucester to win the title.
Along the way they kicked some butt in the Toronto area and beat up on a couple of boys teams by scores that would have you in disbelief.

The new season is about to start. My kid's been skating for a month to get ready and shake off the rust. One thing about kids - there is no rust! Come the beginning of October, most of my time will be spent driving her to arenas around the city and province. It is time well spent. Damn it's great to be Canadian!