Share All sharing options for: MALKIN DOES DISAPPEARING ACT 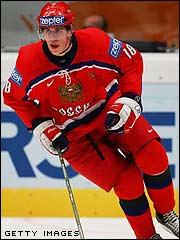 According to NHL.com, Penguins prospect Evgeni Malkin has gone AWOL. The site reports that he is nowhere to found and that his belongings and passport are with him. This could be great news for hockey fans in the steel city, as Malkin has generated almost as much excitement as Sidney Crosby did last season. Malkin has been called the best player not currently in the NHL by just about every reliable source. He is under contract to his Russian team, but without a current agreement between the NHL and the IIHL, it is in dispute whether any contracts have legal standing. It will be interesting to follow how this spy caper unfurls. For the complete story so far, follow the NHL.com link.