The Gretzky Trade Part 2 - Getting Analytical

Share All sharing options for: The Gretzky Trade Part 2 - Getting Analytical 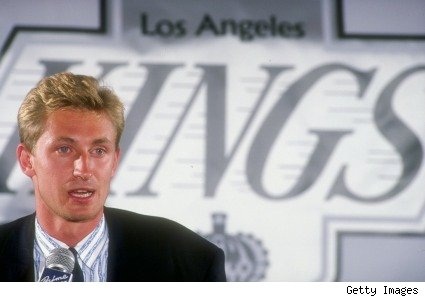 There are small meaningless ones.

There are blockbuster multi player deals.

Analyzing them upon announcement seems almost fruitless but it is done by every fan of the game. One for one deals are sometimes the easiest to assess. "Time will tell" is the attached motto to almost every deal. The simple ones are a lot easier to sort out. The blockbuster deals, take years to declare a winner.

The Gretzky trade, a multi player deal with draft picks, rules the blockbuster category. It would be simple to summarize it quickly and state that the Oilers won the 1990 Stanley Cup with assets received in the trade (Martin Gelinas), and assets culled from the trading of the prime return on the initial deal that was Jimmy Carson (Joe Murphy, Petr Klima, Adam Graves). The Kings for their part reached the 1993 Cup finals, only to lose in five, with Gretzky leading the way.

Pretty much cut and dry stuff, you would think. With the Stanley Cup as the ultimate goal, the Oilers, it appears, win this trade clearly.

Trouble is, a multi player deal has many variables, paths, and twists and turns. Decades worth! Trust me on this! What if, and it's a big "if', a player aquired far down the line as a result of the original deal, figures prominantly in a teams current fortunes. Does the perspective of the original deal, almost twenty years done, change in the public opinion. I doubt it. Memories simply don't work that way. Or that hard!

Consider this fact. Almost 20 years after the Gretzky deal, offshoots of this transaction are still in the league. One currently plays for the Oilers. Two prospects remain in their system. The current longest standing King is a result of the August 9, 1988 deal. Imagine if any of these players were to become sticking points in a trade that landed the Oilers or the Kings a first round pick in an upcoming draft that would yield the either team a franchise player. Unlikely? Maybe. Impossible? You never know!

One cannot be faulted for not remembering names such as Corey Foster or Vladimir Vujtek. They are 51 players who landed with the Oilers as a result of the Gretzky trade. Another 20 passed through the Kings organization. It is hard to believe, I realize. Believe it or not, these players were once sticking points on deals. Vujtek was Jaromir Jagr's center in the Czech republic. Strong final Junior seasons or elevated draft choices, certain players became the make it or break it throw in, in a deal. I always say that hindsight is 20/20. When dealing with a trade of this magnitute, I learnt it is cockeyed also.

Do not discount the fact that a particular player in a trade may at the time seem meaningless in the scope of the overall transaction. Or meaningless in hindsight. The simple fact that they were in the deal may have constituted a sticking point in the deal being made at all. Had Craig Berube not been tossed into the mega trade with the Leafs, the deal falls apart. Toronto was demanding toughness. Glen Sather saw in the player a Semenko / McSorley type of asset that teams had to have in the day. He didn't give him up easily and caused the deal to include seven players instead of five.

The backwards tracing of in excess of 70 transactions is not something I recommend to the average hockey thinker, if one values their sanity. Just when I though I had this whole deal wrapped, seemingly meaningless layers peeled themselves away to reveal a handful of additional transactions and a good 20 more players. What I mean by that, cannot be said in a simple sentence! I almost felt like I was disecting DNA.

Here is the anatomy of it all.