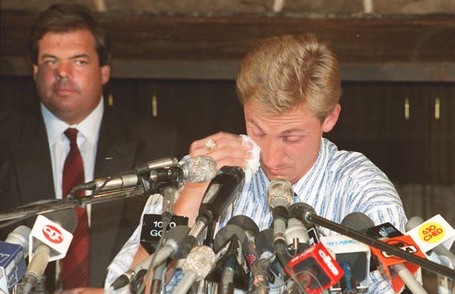 August 9, 2006 marks the 18th anniversary of the trade that changed the landscape of hockey - The Wayne Gretzky Trade To L.A.

It may not have played itself out as hockey's biggest blockbuster deal ever, but it remains the games most shocking transaction. To say the hockey world was caught off guard would be an understatement. The deal touched nerves on issues of national pride and was analyzed from more than just a hockey perspective. It was by and large a business deal, as Gretzky was often mentioned in the following days as an asset as much as he was a player. As the Great One had recently married, domestic slants infiltrated the opinions of the player and his bride. Some went so far as to compare Janet Gretzky to Yoko Ono!

In Wayne Gretzky's book, "An Autobiography", 99 gave his version of the events that unfolded in the days leading up to the deal, and the days that followed. At the time of the trade, fingers were pointed ramdomly, as every fan of the game, thought there should be someone to blame. The trade's two main instigators were Oilers owner Peter Pocklington first and foremost, then Gretzky himself, as he has admitted.

I'd like to be able to reference Pocklingtons book, trouble is nobody bought it. That goes ditto for the spin he put on the trade.

The root cause of the deal was not so much a hockey issue. It was well known at the time that Pocklington's main financial interests lie with a meat packing firm that was taking on losses. With bankruptcy facing the Oilers owner, his solution became Gretzky. The owner felt for some reason that 99 was a declining asset of sorts who was fast approaching the age of free agency. Fearing that he would either lose him for no return or that his value would continue to diminish annually, Pocklington sought out the players market value. After finding a handful of takers willing to suit his needs, Pocklington began the bidding process.

It is here that Gretzky stepped in. The Great One got the word from another player of what Pocklington was up to. He was furious to say the least, not wanting at all to leave Edmonton. When the owner insisted the trade had to happen, Gretzky forced his hand by demanding he be traded to a destination suitable to him. If not, he used not reporting and retirement as leveredge to get his way. At this point, with little bargaining room, Pocklington let Gretzky in on talks with others teams involved.

Prior to this, the frontrunner in talks was Nelson Skalbania and the Vancouver Canucks, whom Gretzky knew and didn't altogether trust from his days as an Indianapolis Racer. As Gretzky spoke with a few prospective team owners, Los Angeles emerged as his likely suitor. He was charmed by the sly manners of Kings owner Bruce McNall, who saw in Gretzky a future partner in a variety of undertakings. Throw in the fact that the Kings played in the Western Conference, and that Janet lived in L.A. and Gretzky was seduced by the idea. Most importantly, McNall had the money to solve Pocklingtons woes.

Having hatched a deal, Pocklington, McNall and Gretzky talked of a media plan to offset (as if they ever could) the obvious fallout from the media, the hockey world, and Canada in general. All would later admit they underestimated the consequences of what they were about to bring down. It was planned that Gretzky being the biggest long term benefactor of the deal would play scapegoat. Unfortunately the media had done its homework on Pocklingtons troubles, and the plan went awry. Once all the arrows had found Pocklington, he started the mudslinging at Gretzky. In the end none of it stuck.

Canada and the hockey universe were stunned, shocked, and in disbelief.

It would always be one of those moments in one's life where you remember exactly where you were when you heard the news.

I had returned to work from an out of town payroll run to find the entire male population of my workplace gathered around the radio with pale faces and sushed lips. Thirteen years later, the exact scenario played out for me again in the very same way as two planes struck the World Trade Centers. The consequences are hardly comparable, but it is an odd similarity for me in many ways.