Share All sharing options for: Eric Desjardins' Moment In Time 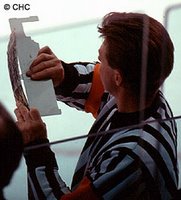 The date lives on in infamy in the hearts of Montreal Canadiens fans.

From it, a tale steeped in hockey lore will live on as long as the game itself. It is the story of one of the wildest finishes to a playoff final game in history. It had a plot twist as crazy as any, with heroes and villains to spare.

With only two minutes remaining in game 2 of the 1993 Stanley Cup Final, Canadiens coach Jacques Demers calls a time-out. The Habs are trailing 2-1. If they let this one slip away, they will be down two games to none, and heading to L.A. for game three in a deep hole. Demers confers with captain Guy Carbonneau and calls the referee to the bench. A illegal stick measurement will unsue.

During the first game of the series, three Canadiens have noticed something. After the game, Kirk Muller, Eric Desjardins , and Carbonneau report to the coach that several Kings players seem to be playing with illegal curves on their sticks. The captain had actually brought it up during game one, with the coach taking note of it when certain players skated by. Demers files the information for use at a crucial moment. He writes down four names; Luc Robitaille, Tomas Sandstrom, Alexei Zhitnik, and Marty McSorley.

With the referee and linesman at the bench, Demers has decided that the crucial moment is now or never. The coach and captain scan the ice and see McSorley. The referee skates over to the Kings defenseman and confiscates the players stick for measurement. This is risky move by Demers. Should it backfire, his team will be assessed a two minute delay of game call. Carbonneau assures him it's not in vain. On the L.A. bench, a flurry of sticks are traded back at forth between players and trainers.

The TV cameras zoom in on the elongated measuring gauge. The verdict - not even close! McSorley is pointed to the penalty box and confusion reigns on the Kings bench. L.A. coach Barry Melrose is livid.

With barely two minutes left in regulation, the Canadiens will profit from an unexpected man advantage. It takes only seconds. Smelling blood, the Habs buzz the L.A. net, firing several shots at goalie Kelly Hrudey. Outmanded, the Kings are unable to gather any rebounds or composure. The puck is sent to Desjardins at the point. He fakes a shot, and moves a little closer. A screen in place, he fires low and Hrudey never sees it. The Forum errupts and the visitors are sent to their dressing room wondering what hit them. It is Desjardins' second of the game.

The Canadiens had won seven straight overtimes leading up to this. With the standout play of Conn Smythe winner Patrick Roy, they feel unbeatable in the extra frame. The teams return to the ice and there is a vibe in the building - almost as if the fans could sense what was about to occur. It takes but minutes.

Early in overtime, the Habs swarm Hrudey once again. The L.A. defense plays like headless chickens as the Canadiens cycle the puck around the back board. The puck comes to Desjardins. He fires a bullet, low and wide. From the corner the puck finds him again and he steps up several strides and through a maze of skates and sticks his cannon blast finds net. The building explodes into celebration. Desjardins is tackled by team mates.

The Kings in seconds are nowhere to be found. Melrose tears a strip of the officiating crew before exiting the bench area, seeing red. Make that red, white and blue!

The Kings never recover and the Canadiens sweep the remaining three games to capture their 24th Stanley Cup.

On this day, Desjardins was a hero amongst many. His hat trick represented the only time in a playoff final that a defenseman has performed such a feat. In the midst of events, the story almost became secondary, though it does deserve to be legendary.

Two years after, Desjardins was sent to the Philadelphia Flyers in a blockbuster deal with two other players for F Mark Recchi. It is a trade many a Hab fan regrets.

Desjardins continued on to have a stellar career, going to the final in 1997, playing in some All-Star games, and representing team Canada twice. The 37 year old blueliner has announced his retirement as injuries have compromised his career.

No one needs to ask him for a career highlight!