Cops and Robbers, Kids being Kids, a Jersey, and Something Cheesy

Share All sharing options for: Cops and Robbers, Kids being Kids, a Jersey, and Something Cheesy

There are weird stories and then there are hoodoo voodoo tales, those of the variety filled with such coincidental occurances, it makes one truly believe that at times there is a greater karma at work in our lives.

The mention of Mario Lemieux at the Waiting for Stanley blog got me thinking about such a weirdness that all came together a few months back. This story is right up Tapeleg's alley, as it has to do with a particular jersey my daughter received as a gift. Given all the coincidental twists this story has, I wouldn't be surprised to find out that Tapeleg and the giver of this gift have done business somewhere back in time.

There are a few back threads to unravelling this tale. Blindsided events back thru time that made everything oddly connect one particular morning. I'm rarely at a lost for words (insert joke here!), but I was on this day.

It starts when I met Thom Racine about 15 years ago. He is a well respected police officer with the Cornwall Police department. I know Thom just a little but he is very well known and much liked about town. He is quite active within the community doing a wide variety of activities. His father, Moe "The Toe" Racine was an excellent place kicker for the Ottawa Rough Riders in the 1960's. His brother Bruce was an NHL goalie for a time. Thom has done play by play on radio for the Cornwall Royals, been the house announcer for the Comets, hosted a sports card show on the community TV channel, and participated in dozens of other activities involving sport and community events. Among his most treasured passions is one wicked hockey memorabilia collection, with an accent on jerseys.

I didn't know this much about him when he knocked on my door all those years ago. He was at my home on a matter of police business. Back then I was heavily into the hockey card collecting and trading hobby and had a prized possesion stolen from right under my nose. My Mario Lemieux Rookie Card.

I had a neighbour with whom I exchanged cards with on a daily basis, and often she would send her son to pick up and deliver. One day, this boy was over to collect some trades, when the phone rang calling me to another room. Apparently this was when the boy lifted my card. I only noticed days later and was very hesistant to approach a friend to suggest her son had stolen from me. I managed to ease into the situation and find out that it was in fact he who'd stolen it. My friend had had enough of her sons sticky finger antics and wanted the police called. How Thom taught the boy a lesson without charging him was quite unique. He made him collate in numerical order a complete vendors case of 1990-91 O-Pee-Chee Hockey Cards. A set of 396 into likely 40 or so sets. I'm sure he never wanted to see, let alone touch, another hockey card for quite a long while after.

This was the circumstances under which I got to know Thom. Over the years we would run into each other periodically and reminisce over that day.

At some point, Thom began making the rounds of primary schools with parts of his memorabilia collection. It was always an entertaining day for the kids, who got to check out some cool hockey stuff and connect with a local officer. He stopped by my daughter's school two years ago for one such day, and the school principal decided it would be a neat tie-in to have prizes and a trivia contest.

Thom complied by bringing out 3 members of the Cornwall Colts team for autographs and questions. I found out all of this much later. At the time I had no idea that Thom was even involved. My daughter had only refered to him as "some guy with lots of stuff".

A contest was part of the fun day. All the questions had either a local sports angle to them or be somehow connected to the Habs, Leafs, or Sens, thus simplifying the kids search for correct answers. The principal was Kennedy McDonald, younger brother of former NHLer Blair McDonald. Blair was the beneficiary of some smooth Gretzky passes in 1979-80, accounting for 48 goals. That was question #1. Kennedy did not want anyone to get all the questions correct, so he loaded a trick answer to one of them, so no one would score 25 out of 25. Parents were of course allowed to help. Since no one would get all the right answers the first prize would be drawn from a hat filled with all 55 participants.

Yours truly, saw to it that the hat had but two names in it!

Yes I got all 25 right. I knew 19 of the answers off hand, and did net searches on the rest. Both my daughters scored perfect. As far as the tricky trivia questions goes, it had to do with which year the Ottawa Senators won their first Stanley Cup in the NHL. Most answered the first year that they'd won it, in the NHA instead.

What ensued was the stuff of a kids comedy show. My oldest daughter badly wanted the signed Colts jersey, my youngest had no idea what was of any value. She had her young eyes on the collections of McDonald's NHL replica trophies. The principal drew her name to go first (my oldest didn't get to go second) and she went straight for the shiney little plastic toys. My oldest was fuming, "Daddy would have wanted that sweater!" "Would have" is right. Today,I wouldn't trade it for this annecdote. My daughter never quite got over it though.

I still collect memorabilia odds and ends. At my Kraft workplace this past winter, the company was running a national promo called "Skate With The Greats". We have a small store on my way out of the plant, and they had two large cardboard cutouts of players featured in the promo along with booklets of contest rules and product tie ins. One immediatly caught my eye. It was one of Dale Hawerchuk and Darryl Sittler. I went in to put my name on it, but it had already been taken. A second one featuring Steve Shutt and Yvan Cournoyer became my possession three months later when the promo ended.

It was so huge that I had to put both the back and front seats down in the car just to haul it away.

I was planning to give it to a friend of mine for whom I'd gotten others for, such as a Don Cherry cutout, a Gretzky and a Muller/Gilmour silhouette. He didn't want it.

His apartment was now too small. I placed it in the darkness of friend restaurant owners office in order to spook him into keeping it. He didn't want it.

He offered to find a home for it for me, and kept it in his office to wake himself up in fright each morning and it sat there for weeks. I offered to take it off his hands but he really wanted to be the one to give it away. He had somebody in mind. They didn't want.

All said "Thanks, but no thanks" - it was way too huge to place anywhere!

When the Canadiens played the Hurricanes in game six of these past playoffs, I watched the game on the big screen at this restaurant and went to get the cutout. I thought that placing it next to our table would provide good luck to my Habs, with Shutt and Cournoyer looking on. I got the night shift manager and we snuck quietly into the darkened office and there it was - gone! Needless to say the Habs were eliminated that night.

I found my owner friend two days later and asked who finally had found room for the cardboard monolith. No it wasn't the kid that ripped off my Lemieux RC, but close. It was someone named McDonald - who giving it to their Dad! Hmmm!

Round about this time, a senior sports writer in the city had passed away. He was well known about town also and had once written a book on the Cornwall Royals called "The Frozen Stage". He had a small sports column in a local weekly and when he passed, I saw myself filling his shoes. I applied, was given some consideration, but the job in the end landed in the hands of one Thom Racine.

After he had published a few columns, I used his e-mail address to contact and congratulate him. I asked him a question or two, and after all these years he remembered me from the stolen card incident. We were e-mailing each other for a bit after that as he was on holidays at the time. One day he sent me some awesome pics from his basement collection. I showed them to my oldest daughter who immediatly said " That's the guy who was at school with the Colts jersey I didn't win!" I explained to her how I knew him as she told me that she'd seen all that memorabilia at her school.

Next day when I e-mailed Thom and told him all this, he laughed and said he remembered that day, and those two kids, very clearly. He thought the story of how we missed out on the jersey was funny as hell and agreed it was more special than the sweater itself. We were throwing trivia questions back and forth at each other for a bit when suddenly he was no longer responding.

A half hour later there is a knock at my door. There is Thom and he's pulling a jersey out of a bag. "Here", he said, "give this to your daughter. Maybe she won't be so sad anymore about losing the other one."

At first I thought he was pulling out a Colts jersey, but instead he hands me this beauty: 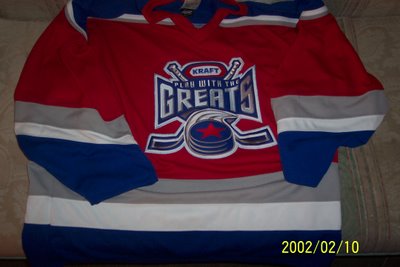 Funniest thing was, he had no idea I worked at Kraft. I asked where he'd gotten it and he said it was from a Kraft plant manager who was a friend. I asked if he worked at the same location as I did, and he said that he worked out of Montreal. He asked me not to tell anyone about it (Shhh! It's just between us!) As it was way too large for my daughter for now, I wore it to work the very next day.

When I arrived at work I found I was scheduled for a one hour meeting/seminar prior to heading off to my line. I walked into the makeshift classroom office when a gentleman walks in, puts his books down on the desk, takes one look at me and says, "Hey cool sweater, I just gave mine away to a dear friend last week!"