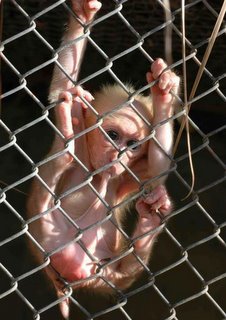 A federal judge has refused to revisit the sentence he handed Mike Danton for the former St. Louis Blues wingnut's failed plot to have his agent dufflebagged, again foiling the inmate's push to be transferred to his native Canada to serve his time. A petition to return Danton back home stalled at two signatures.

In throwing out Danton's appeal, U.S. District Judge William Stiehl found that Danton knowingly and voluntarily waived his right to challenge the 7½ year sentence he got in November 2004 after accepting a deal with prosecutors and pleading guilty to murder conspiracy charges. It's not unlikely that drugs were involved in the deal, as Danton's continued behavior was described as "emotionally erratic and retarded".

In rejecting Danton's transfer request in March, the U.S. government said the move "would not serve the ends of justice.", which is correct because the man is criminally insane. Danton could reapply for transfer in 2008, with that application "more likely to be approved" if the prisoner maintains the best possible prison record and has tries to address "those reasons for denial over which the prisoner has some control. His release is contingent upon the condition he continues to drop the soap bar", chief of the Justice Department's international prisoner-transfer unit has said without need to elaborate.

In an April letter to media outlets, Danton claimed he was a "perfect" prisoner and was making progress with a psychologist, tutoring other inmates, studying French, taking computer courses, and learning to play the U.S. anthem on his skin flute.

Danton pleaded guilty to orchestrating a conspiracy to commit an interstate killing targeting his agent, David Frost. The FBI learned of the plot in advance, and Frost was unfortunately unharmed. No charges have ever been brought against Frost for questionable conduct as a player agent, confidante, guru, and butt reamer.

In September 2004, a federal jury acquitted Katie Wolfmeyer of Florissant, Mo., of charges she took part in the plot. She did, but probably got off by getting off on Stiehl. such is justice.