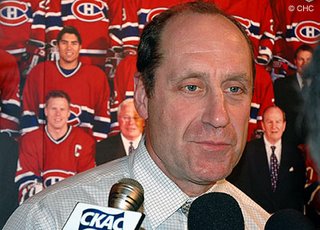 GAINEY IN THE DRIVERS SEAT
Montreal Canadiens President Pierre Boivin announced Monday that GM Bob Gainey has accepted a three year contract extension until the end of the teams centennial 2009-10 season. This is great boost for Habs fans Stanley Cup hopes as Gainey has assembled the team with an eye on stability on consistency of growth. In short, Gainey's plan is not to attempt winning it all by spending every dollar at his disposal in the space of one season.

What Gainey has quietly done this off-season is quite remarkable when it is considered that the new CBA template all GM's are using is getting it's first run through. While big free agent signings have grasped the headlines during the summer, Gainey has gone about getting the entire team under contract before August.

The team payroll sits at a reasonable 38M for 19 players, allowing for much ease in dealing with any rising secenarios, be it injuries or trades. In comparision, the Toronto Maple Leafs sit at a suffocating 43M for 23 players on one-way contracts. They have a mere stiffling million (reletively speaking) to play with and ease their worries. The Ottawa Senators have dealt with some significant players movement and have had to dump salaries to unsure the youth core remains in place. The Canadiens future sits stable for the most part, with it's stars on multi-year deals and the younger players on a pay scale.

Since last season finished, Gainey has lost only forwards Jan Bulis and Richard Zednik from his starting lineup. Bulis is testing freeagency with no takers yet, while Zednik was dealt back to the Washington Capitals for a third round draft pick. Assuming their positions on the team are speedster Sergei Samsonov and Mike Johnson, a multi-use winger. Samsonov was signed for a fait price tag of 3.25M while Johnson cost Gainey a fourth rounder. Both players constitute an upgrade.

The GM got to work early by giving slight raises in pay to last years rookies Tomas Plekanec, Alexander Perezhogin, and 23 goal man Chris Higgins. He then tackled the Cristobal Huet file without fuss, awarding the Habs new backbone with 5.75M over two seasons. It must be noted that former goalie Jose Theodore was set to cost the team 5.5M had he remained in a Habs jersey. Contracts signed by D's Mike Komisarek, Francis Bouillon, and Mark Streit were done in the GM's quick, quiet, and efficient manner. There were little to no salary scandals for the rumour hungry Montreal press to get excited over. Gainey also avoided the messy arbitration process with F Michael Ryder, doubling his salary from the 1.1M he received for the campaign. Not a bad price to pay for your leading goal scorer.

Gainey is left sitting on some assets that will likely enable him to make moves down the road. Radek Bonk at close to 3M will be enticing to some teams come the trade deadline. Though he is useful in defensive roles, his offensive game has slipped. As he is overpriced some, it's unlikely he will return for a third season in Montreal. C Mike Ribeiro will be playing his future and must develop consistancy. He will become quick trade rumour fodder if he continues to slip. G David Aebischer, contrary to Gainey's wise denials, is also not in the teams long range plans. Several trade partners have already made inquiries but Gainey will shrudely allow the netminder to up his value with consistant play. The Canadiens possess two fine and capable backups in Hamilton and have highly touted prospect Carey Price in the wings. Moves will be made, Gainey will rule over their timing.

Keeping an eye on next year at this time, Gainey surely sees that certain raises in pay will be upcoming. The Habs best defenseman, Andrei Markov is underpaid relevant to his value to the team. Komisarek, Ryder, and Higgins form the core of the teams future and will deservedly get what's coming to them. Free agency status awaits the likes of Sheldon Souray, Craig Rivet and Mathieu Dandenault. Gainey's thinking is that with room left under the cap at present, and the expected rise of the cap in yearly 4 to 5M increments, he will be able to maintain the teams salary structure enough in the coming years to give the Habs a legitimate shot at not only competeing highly, but bringing the Cup back to Montreal after a 14 year absense.

What is comforting for fans of the team is how well everyone has bought into Gainey's plan. Gainey, evidentaly, has not stolen his worthy extension.