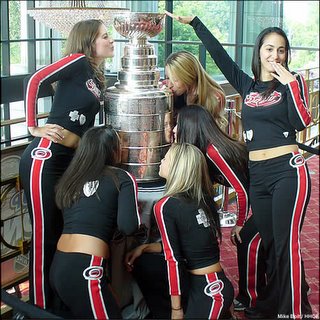 I've seen lots of photos and poses with the Sacred Chalice in my time. Never have I seen Stanley looking so happy and satisfied! So erect, shiny and proud. The biggest winner here is the Cup itself. Damn! Talk about a menage a six.

What would you do if you had such a photo op with the big mug?

I surely wouldn't let a horse drink from it like certain Rangers did in '94! I don't think I could be so absent monded as to forget this babe by the roadside like members of the Ottawa Silver Seven did in the early 1900's. Want to induce a curse, that's a good start. Hmm wonder what the Leafs did in '67 to bring on 39 years of Cupless misery. Perhaps being an inferior team winning it in the midst of Canada's centennial year and breaking up a second string of five right before the Summer Of Love will get you cursed! Who knows?